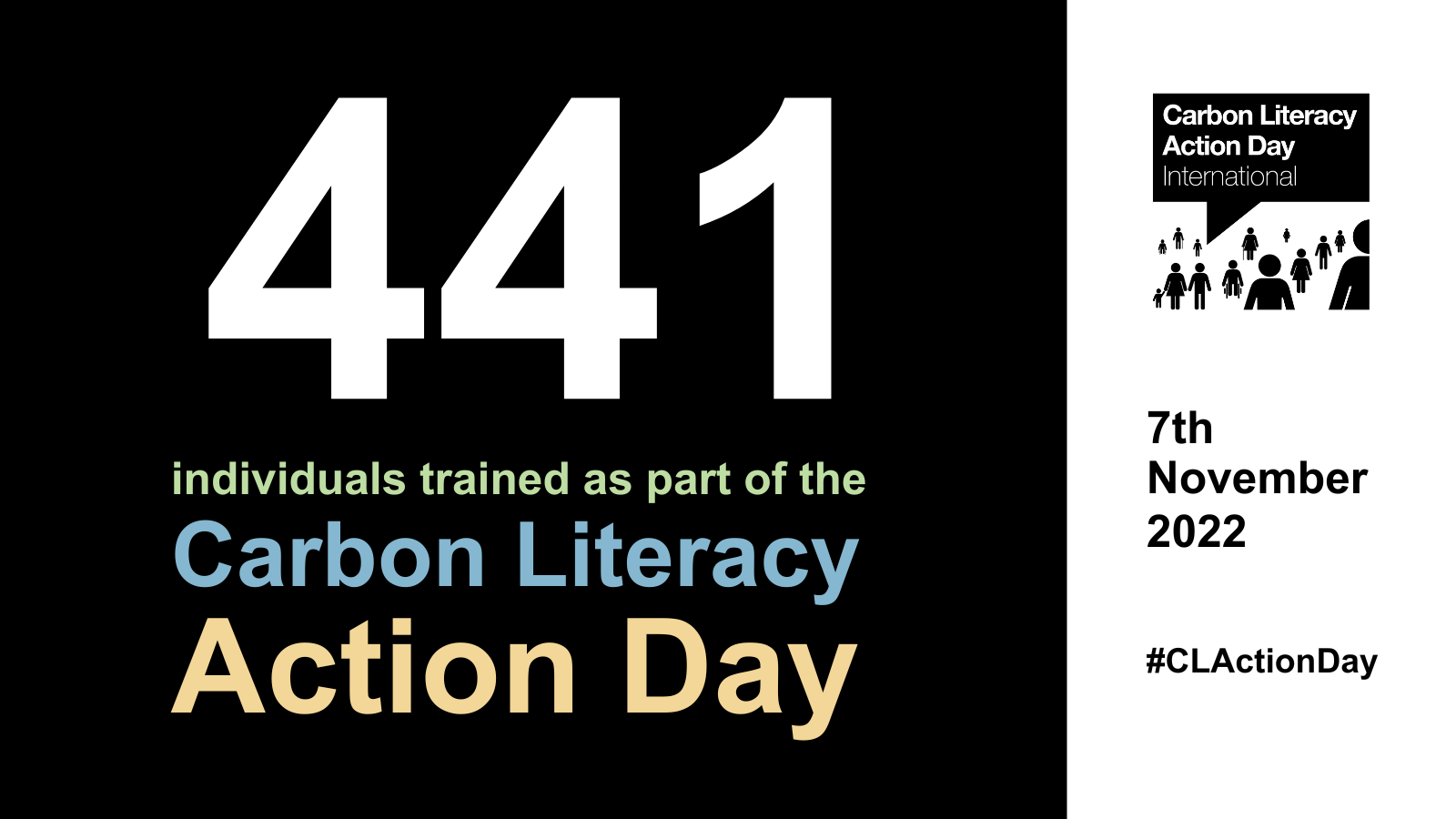 On the 7th of November, we held the second annual international Carbon Literacy Action Day; and what a day it was!

The Action Day is the largest mass climate action training event of its kind, where we witness learners from all walks of life, sectors, genders, ages and nations, all around the world, complete their day’s worth of Carbon Literacy training to become certified as Carbon Literate.

Uncoincidentally, the Action Day aligned with day 1 of COP27, which, this year, was held in Sharm El-Sheikh, Egypt. COP conferences are the largest, most significant climate talks of the year, as the whole world prepares to watch our world leaders gather and negotiate on the climate crisis. Thus, it presents an opportune time for us to stage our mass climate training day, and kick off a fortnight of climate talks with essential climate education and action. And so, while world leaders gathered in Egypt, Carbon Literacy learners gathered around the world.

In total, an astonishing 441 individuals took part in and completed their Carbon Literacy training on the Carbon Literacy Action Day! These learners will go on to become officially certified as Carbon Literate, and this total figure is both important and astonishing to us, as we know the significant impact on mitigating the effects of climate change that these individuals, no matter their position or skill level, will have.

As a result of their certification and newfound knowledge on climate change, 882 actions have been pledged by learners to tackle the climate crisis, by reducing their carbon footprints, doing things differently, and taking action to influence their wider spheres. In total, these learners have saved approximately 1,500 tonnes of carbon emissions.

These 441 learners came from:

The scale of our audience

The breadth of the Action Day is evident through the diversity of the organisations and individuals that took part, and the many locations where training took place all around the world, including England, Scotland, Wales, Northern Ireland and Australia. Furthermore, in addition to the learners from the countries mentioned above, we saw learners from nations new to Carbon Literacy, including Brazil, China, Mexico, the United Arab Emirates, the United States and the Philippines!

During our Virtual World Tour, an event held live on Zoom to bring the Action Day to a close, we had the chance to hear from many of the organisations and trainers that took part in the Action Day. They discussed how they got involved, we heard how their training day went, and what Carbon Literacy looks like in their organisation or community. By the end of the hour, one thing was clear – the validity and importance of Carbon Literacy, for every type of individual and organisation, was solidified. Carbon Literacy is truly for everyone – no matter who you are or what you do!

We have witnessed unprecedented growth in 2022, starting the year with 25,000 learners and now heading into the last month of the year with over 46,000! The Action Day has and will continue to play a truly important role in our growth here at The Carbon Literacy Project, as it drives an increased level of involvement and engagement in Carbon Literacy, and most important of all, allows individuals, organisations and communities to tackle climate change in the most relevant way for them.

This year, we introduced the CLAD Catalyst – a unique award for organisations that catalyse action on climate through the Carbon Literacy Action Day. We encouraged organisations taking part in CLAD to consider how they can maximise the impact and outcome of their training, to be in the running for the award, and we were thoroughly impressed by the catalytic action that was displayed as part of CLAD 2022.

After reviewing submissions and finalising the contenders, we are pleased to announce that the winners of the CLAD Catalyst Award 2022, are…

A huge congratulations to all three of our winners! You can read more about the CLAD Catalyst Winners and how they catalysed climate action this Action Day, here.

A word of thanks

We’d like to extend a huge thank you to everyone who took part in the Action Day, from all over the world, and who came together with us and contributed to the culmination of rapid action being taken on climate change. Furthermore, we owe our sincerest gratitude to our fantastic team of CLAD Volunteers who are offering their time to process the extra surge in applications at this time of year, alongside our usual dedicated team, to which we are incredibly grateful.

We now look forward to the next Carbon Literacy Action Day, which will be held on day 1 of COP28, Monday 6th November 2023. We hope that on our third Action Day event, more organisations will join us, and that we’ll train even more individuals to have an even greater impact on climate!

If you’d like to be part of the Action Day 2023, you can express your interest by emailing CLAD@carbonliteracy.com.

If you are interested in the Action Day but aren’t yet engaged with Carbon Literacy, we strongly advise you get in touch as soon as possible so you can begin your Carbon Literacy journey today.