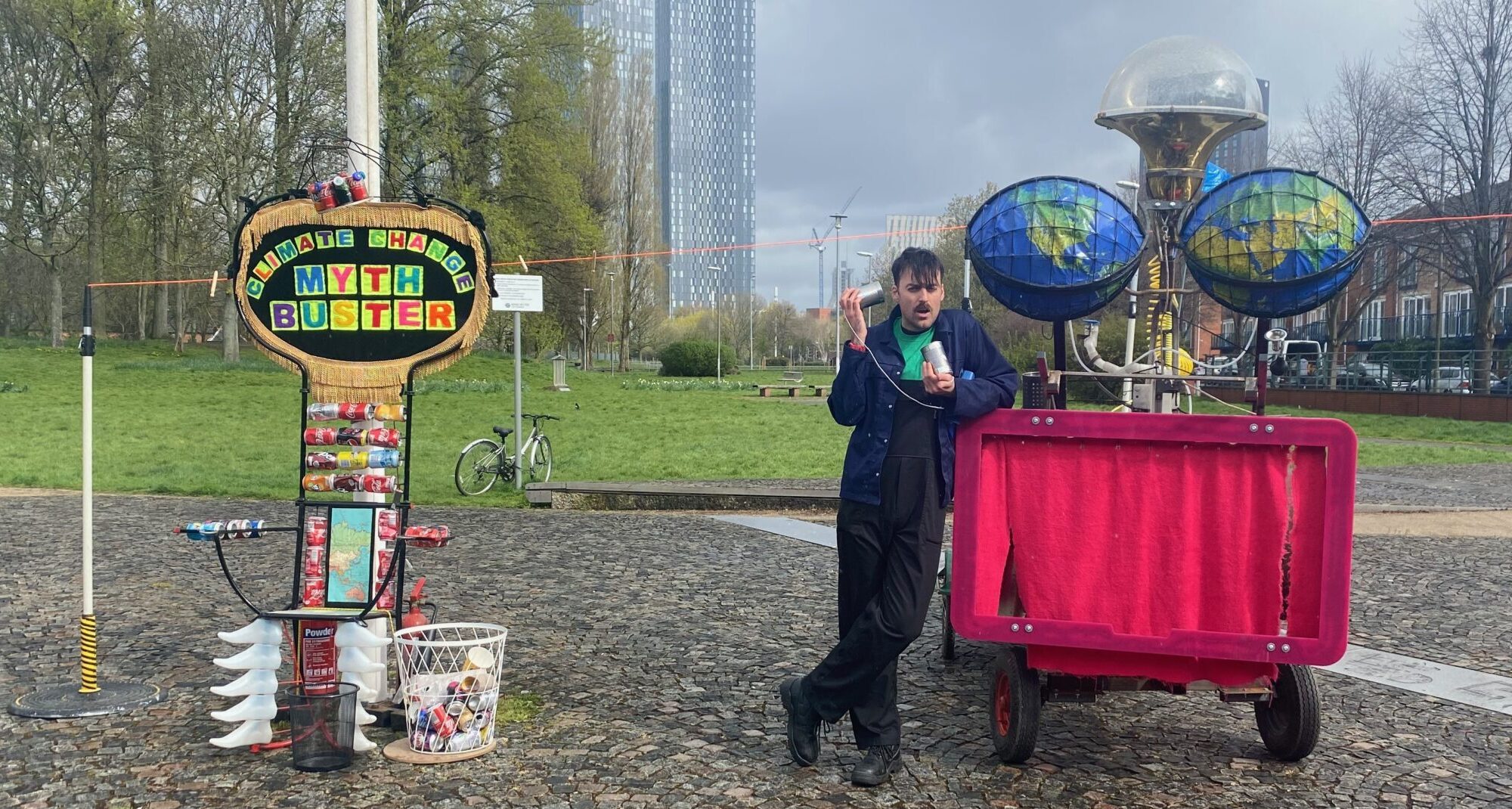 A magical machine is making its way around Manchester over the next few days! With large blinking eyes and an insatiable hunger to eat up climate change myths, the Myth Buster will be sure to spark conversations and delight anyone who crosses its path.⁠

We had the opportunity to see the Climate Change Myth Buster in action at the first stop of its three-day tour in Hulme, Manchester.

The Climate Change Myth Buster is an impressive touring street theatre production created by Walk the Plank, conceptualised by Dan Potra, developed and built by Bryan Tweddle, directed by Bill Palmer, and commissioned by C-Change with support from Arts Council England, Manchester City Council and Hubbub.

The machine itself – or Bertha, as she’s lovingly referred to by her scientist minder – is a wonderfully wacky work of interactive art. She offers family-friendly fun for all ages, as the audience decides which climate change ‘facts’ are actually myths and feeds them directly into her chomping mouth. Bertha has a few surprises up her sleeve, and even offers some up-cycled items in exchange for being fed!

The motivation for the Climate Change Myth Buster came about when a concerned Manchester MP realised some of his local constituents had some misinformation about climate change. Conversations between Manchester City Council and Walk the Plank conceived a plan to tackle this misinformation, so commissioned artist and maker Bryan Tweddle to bring it into being.

Walk the Plank is an outdoor arts organisation that creates spectacles and installations in unusual places. The idea for this particular production was to start positive conversations about climate change among local communities in a fun and engaging way.

The machine’s captivating appearance and equally quirky minder is quick to draw attention, and the message is subtle yet clear. The research stage, carried out in conjunction with Hubbub, informed what issues the installation would highlight and how they would be best delivered. As part of this, the Walk the Plank team undertook Carbon Literacy training.

Laura Lannon, Walk the Plank’s Stage Manager for the Climate Change Myth Buster, explained how their Carbon Literacy training drove thinking around the life cycle of products. This helped to focus the machine’s message on the biggest impact changes people can make to tackle climate change in their everyday lives.

The Climate Change Myth Buster is a multi-faceted machine with room for continual development; to debunk new myths or address different issues. By getting people to think about their own activities, and the small but significant changes they can make, Bertha is not only busting myths but changing minds and empowering people to take positive climate action.

If you’re Manchester-based, head down and see Bertha the Climate Change Myth Buster yourself over the next few days!

Can’t make it this weekend? Don’t worry! The Myth Buster will be at various events in Manchester over the upcoming months, including at the Manchester Day parade and the Irwell Weekender. Keep an eye on Walk the Plank’s website for more information.