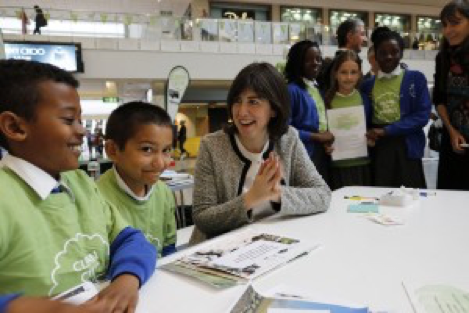 PRESS RELEASE – Summary: Manchester-based charity The Carbon Literacy Project has just been selected from a global field as one of 100 “Transformative Action Projects” for the world, as part of the UN Climate Change summit, in Paris, in December.

The tiny charity has always punched well above its weight, and will now be flying the flag for Greater Manchester as one of only 4 UK projects selected.

The project has been selected as one of the best responses the world has to offer in order to tackle climate change, and is being seen as the vital ‘missing link’ between the technology to solve climate change and people’s motivation and action on the issue.

COPY: A tiny Manchester charity has landed a slot at the historic climate change summit in Paris in next month. The Carbon Literacy Project has been chosen from a global field to be part of the prestigious Transformative Action Programme (or TAP). It has been chosen by a global panel as one of the most innovative local projects that could change the world. The unique Manchester scheme is one of only four chosen from the UK – and with only three staff and a small team of volunteers the charity says ‘it’s like winning an Oscar!’

Research has shown that there is no scheme or initiative like the Carbon Literacy Project anywhere else in the world and this caught the TAP selectors’ attention. The fundamental idea is that everyone who lives, works or studies across Greater Manchester gets a basic understanding of climate change, but the training is adapted so that it immediately matters to its audience. The Carbon Literacy Standard defined the term “Carbon Literacy”, ensures the quality of training delivered, and so far over 2000 citizens across Greater Manchester are already certified as Carbon Literate with many more on the way.

Greater Manchester’s Carbon Literate now range from primary school children to university students, business-people to community workers, typists to TV producers. Learning can take place in workshops, classrooms, gardens or on-line and is always designed to be instantly relevant to its learners. Carbon Literacy training concludes with the creation of actions that take place where the learner is based – in their home, street, workplace, school or university. As a result it is immediately meaningful and results in real action on the ground where people live, work or study.

The TAP programme has been organised by ICLEI, a coalition of organisations representing city and sub-regional governments under the umbrella of the UN, and looks for projects to transform action on climate change at a city or regional level.
A rigorous selection process was launched in Spring 2015 and The Carbon Literacy Project (CLP) was nominated for selection by the Greater Manchester Low Carbon Hub. The aim of the TAP initiative at COP21, is to put the selected projects in front of the many influential leaders and funders attending the two week event, so that they can take up these innovative ideas and accelerate our global action to tackle climate change.

The Carbon Literacy Project is entirely self-funded, relying on a small team of staff and highly motivated volunteers, and income from sponsorship, donations and modest charges for certification.

Manchester City Council Leader Sir Richard Leese says:
“It’s great to see that Manchester will be represented on this prestigious platform at the Paris talks. Having supported the Carbon Literacy Project from its inception I’m especially pleased to see it get this world-wide recognition and I hope that it will in turn enable another ‘Made in Manchester’ invention/concept make its mark far beyond our boundaries/borders. While what happens with the world leaders at COP21 is rightly headline grabbing, cities is where the real climate action is at the moment – and we’re glad to be playing our part.’

Chair of the Carbon Literacy Trust, Ali Abbas says
“Because Carbon Dioxide does not recognise boundaries in the damage that it does to our climate, our project would have been a failure had it only succeeded in Manchester. That’s why the TAP invitation to COP21 is such good news. We’ve built the project so that it was ready for export and it’s hard to imagine a better place for that interest to be generated than Paris in December.”

Cooler’s Co-Director Phil Korbel says
‘We know what we need to do to solve the climate change crisis – the tools are already there. The Carbon Literacy Project is about building demand for the solutions by creating mass involvement in taking up and even inventing better ways to use those tools. Our project gives knowledge and, crucially, motivation to whole populations and as we do so ‘doing the right thing’ for the climate becomes easier and part of everyone’s lives. Having the chance to communicate this Manchester invention to the rest of the world in Paris is tremendously exciting’

Clearly the weekend’s terrible events have given us all pause for thought. However climate change is already a significant cause of conflict, so attending Paris and making our contribution to a successful summit is now more important than ever.’

As well as meeting as many interested parties in Paris as possible The Carbon Literacy team will be blogging about their experience as newcomers to the ‘climate summit scene’ and offer Skype conversations to their many project partners back in Greater Manchester to connect them directly to COP21 delegates and visitors.

[2] Cooler Projects CIC (www.coolerprojects.com ) is a Manchester based Community Interest Company, a social enterprise founded in 2009 by Phil Korbel and Dave Coleman, that delivers projects and advocacy to create low carbon futures.

[3] Carbon Literacy is defined as: An awareness of the carbon dioxide costs and impacts of everyday activities and the ability and motivation to reduce emissions, on an individual, community and organisational basis.

[4] Carbon Literacy is one of the headline aims of the Greater Manchester Climate Strategy, ( http://meetings.gmwda.gov.uk/mgConvert2PDF.aspx?ID=8975) agreed by all 10 authorities of Greater Manchester in July 2011: “ ‘Carbon literacy’ will have become embedded into the culture of our organisations, lifestyles and behaviours.”

[6] Manchester: A Certain Future is the city’s stakeholder written climate change action plan. The plan is downloadable at www.manchesterclimate.com. This contains the city’s Carbon Literacy Aim written in 2009 as: “ “Everybody in the city – every resident, pupil, student and employee – will have had at least one day’s training in climate change, probably several days by 2020.”

[7] The project has been generously supported by Bury-based founding sponsor Westford Mill (http://www.westfordmill.com/)