The LGBTQ+ Community and Climate Justice 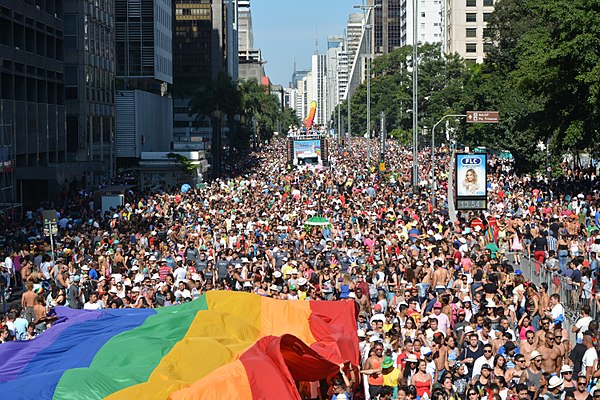 To clarify, I am writing as an ally and cannot give voice to the community that I am attempting to write about, however, I have the support of colleagues within this community. In doing so, I hope to raise awareness of an issue that has not received sufficient coverage.

‘Mother Earth is Queer and we all know it’, so writes podcast duo ‘Homo Sapiens’ in the foreword to their interview with Isais Hernandez, otherwise known as Queer Brown Vegan.

We must remember that protests may be triggering for LGBTQ+ communities who have often had to fight for their own survival. Straight spaces do not often sit well for queer communities. So, it is essential to make environmentalism intersectional and inclusive. Put simply in one study: ‘Lesbian, gay, bisexual, and transgender (LGBT) individuals do not have equal or full human rights when compared to heterosexual individuals, families, and couples.’ There must be a place for them here.

Owen Jones explored how straight men aren’t recycling in fear of seeming queer. Though this may seem trivial, it is only a micro example of a much larger problem. Straight men, when choosing plant-based diets are often deemed ‘soy boys’, alluding to the link between oestrogen levels and soy consumption. The entanglement between climate activism and ingrained homophobia may make it uncomfortable for queer people to feel safe ingratiating themselves in what often becomes an uncomfortable backlash. The term ‘petro-masculinity’ refers to the old world order of high carbon outputs from fossil fuels and the largely white, straight, male magnates that rule over it. It is this defence of what the ‘norm’ should be that plagues both the environmental and queer communities.

This is where ‘Queer Ecology’ comes in: dismantling heteronormative ideals of nature— the status quo, as it were, to argue that there is more than the black and white nature of the ‘environment’. Queer Ecology looks to re-define the ‘natural’, no longer a hetero-natural vision. It is from queer ecology that many grassroots environmental campaigns have sprouted: not pandering to the same environmental ideal, but being more specialised, localised and diverse.

For the queer community, this could not come sooner. 40% of homeless youths in the US identify as LGBTQ+, largely in states that face the threat of climate-related natural phenomena. This was most recently seen in the Texas storms of February this year, where 6 homeless people lost their lives. Often the locations where LGBTQ+ community members face the greatest adversity are places that are likewise at risk from climate change, and climate refugees are statistically far more likely to face further adversity if they are LGBTQ+. According to the UN, trans, non-binary and intersex individuals also face a larger threat, since they may not receive adequate or appropriate healthcare. The intersection between queer justice and racial justice is often tangible in the environmental movement, since many queer asylum seekers are people of colour.

This is not to prove how environmentalism may support queer people, but how much queer liberation is also an environmentalist issue, as traced in this Earth Justice article. The oppression of a whole community destroys potential future thinkers, leaders, collaborators, allies. The ground-breaking protests of queer activists inspired the environmental movements that we are witnessing now- the bravery, the heresy. From a community that has long been ostracised and made to feel separate, the fight to protect the planet aligns with an ethos of self-preservation and recognising one’s own worth.

Though it is vital not to conflate two very separate imperatives and fights, the very nature of protesting and fighting to exist is innate to both. To help raise awareness for both, you can choose to give a platform to LBGTQ+ environmentalists and activists:

QueerBrownVegan has informative infographics on his Instagram. Listen to Jamie Margolin’s, founder of Zero Hour, explanation of the link between queerness and environmentalism, citing a relationship between the foundations and beginnings of both movements. Engage with platforms such as OutForSustainability, who vocalise creative and innovative ways of moving forward the environmental movement. Noah Goodwin reflects on his experiences both as a gay man and as an environmentalist here. Learn, read and donate to International Railroad for Queer Refugees. Read up on Nim Ralph’s activism, and feel inspired.

Include these voices in your daily scroll. Stick them in your ears as you take your daily stroll by listening to Our Climate Voices, who unite and amplify the voices that often get lost in the climate discourse. The platform needs to be shared if we are to include everyone that we are fighting to protect, and there is so much to learn from this community.