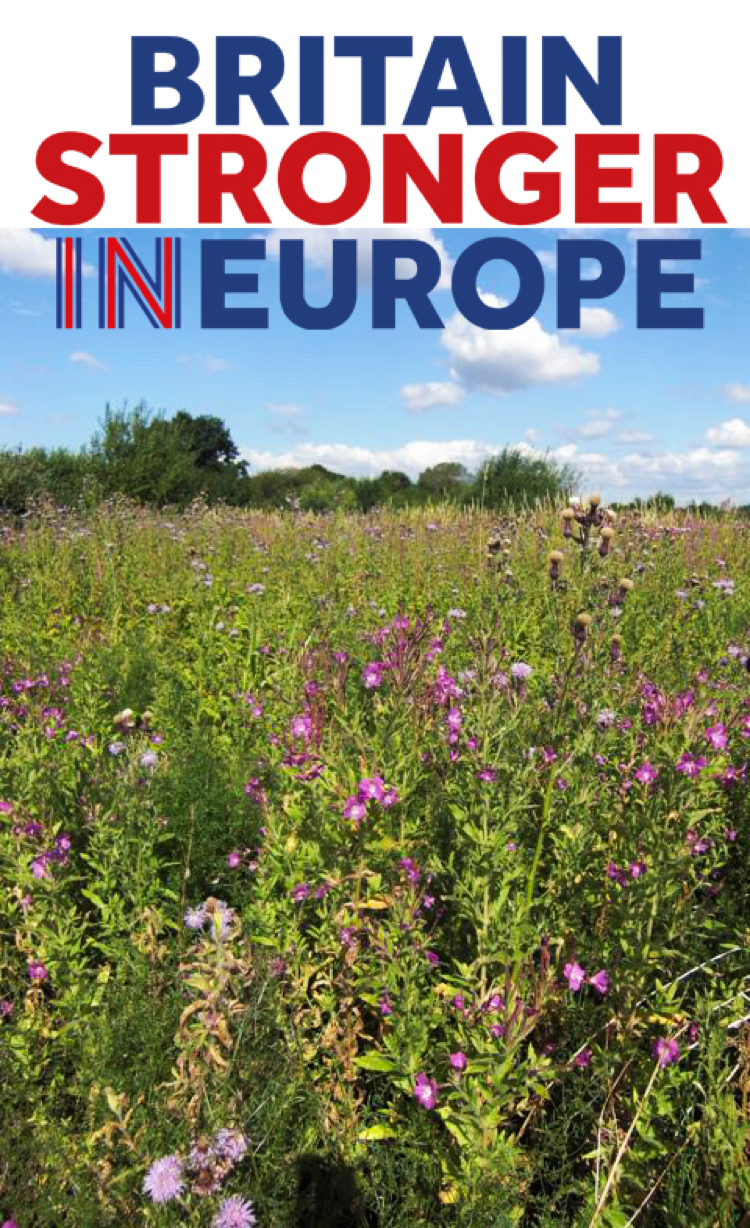 The environmental case is overwhelming. We are Better Together and Stronger IN – In the EU Referendum, we will see more progress to address climate change with Great Britain remaining part of the EU, than outside.

The Carbon Literacy Project is entirely apolitical and does not comment on party politics, but on an issue as important to our environment as the UK EU Referendum on Thursday June 23rd, we feel it would be wrong of us not to make our position clear.

In recent weeks the Leave campaign has repeatedly lost the factual arguments. £350m a week contribution to the EU? Nope, simply not true. Better for the NHS if we Leave? Nope. The head of the BMA says this is “fantasy” and “a slogan designed to deceive”. In almost every sphere of life: finance, the economy, business, manufacturing, border security, the NHS, science, sport, the arts: the organisations that lead and deliver, and their individual leaders, have been clear that remaining part of the EU will keep the UK stronger and in control of its own destiny, rather than leaving ourselves isolated as a nation outside.

With regards to the environment, and climate change in particular, here’s the challenge:

The environment doesn’t recognise dotted lines on any map.

Our water, our wildlife, our air and most importantly the carbon dioxide it contains, recognise no maps, and are shared across every border. So environmental action in one country affects or harms all others. As a result, if we are to have strong rules to protect us all, to preserve the good and prevent the bad, we all need to participate in drawing that that legislation up and honouring it, and the more closely aligned we are, the better we can do this.

In the UK for years we could have passed legislation mandating water treatment standards resulting in cleaner beaches and healthier seas. But we didn’t. “What’s the point in treating our sewage when if we do, the French probably won’t bother, and if they do then the Germans won’t, and if they do….” etc. etc. It wasn’t until collectively, as part of the EU we all agreed to do the sensible thing and clean our acts up, that as a result we ALL benefitted.

There is no point in saying “well we could do that even if were outside the EU” – because we didn’t. Emissions standards for vehicles – the same. Energy efficiency standards for light bulbs and domestic equipment – the same again. Renewable energy targets – the same. Climate change and a safe environment are global challenges that need global solutions and simply wont be addressed by nations acting in an uncoordinated way, individually. They are challenges that require us all to buy in (and yes it involves some financial contribution) but we all make more progress when the whole is far more than the sum of the parts.

Action to reduce emissions is easier and cheaper when we adopt common agreed standards – in which the UK has its say, act in concert, share our costs and co-operate amongst fellow nations. The EU has been the source of most of the best UK legislation to protect ourselves and our environment, and all the evidence indicates that strong action on climate is far more likely to succeed with the UK inside the EU than out.

As a result environmentalists (such as Friends of the Earth, Greenpeace, George Monbiot,) and scientists from Prof Brian Cox, to Prof Stephen Hawking, have lined up to urge support for a Remain vote.

SO: what is someone who cares about Carbon Literacy, climate change and the environment to do?

In truth, if you are reading this you are probably already planning to Vote Remain.

Social media means that our discourse is increasingly tribal, and increasingly we are talking to ourselves in our own echo chamber. I genuinely don’t know a single person who has told me that they plan on voting Leave. In fact quite the opposite. In every conversation I’ve had where the topic has cropped-up in recent weeks, I’ve been surrounded by groups of baffled people who cant understand why we are even talking about this issue, much less having to vote on it, when there are so many more important things in the world that need to be sorted out.

However a Com-Res poll released on June 16th showed that there was a clear correlation between individuals still identifying as in climate denial, and those planning on voting Leave. Both stances require a knee-jerk emotional response in complete denial of the facts. The fact that fear and resentment of “immigration” is one of the key issues for those planning to vote Leave, and the number of war refugees fleeing to Europe and the UK is being swollen by climate refugees fleeing African countries, is just one of this little ironies.

So what to do?

2:  Between now and close of voting on Thursday night, find and speak with just one other person who is undecided or considering voting to Leave. In a gentle non-confrontational way, discuss the issues with them and urge them to vote Remain. Perhaps identify the issues they feel justify their vote and ask them to explain why the organisation responsible for that sphere of life is supporting a Remain vote (because they will be….).

3:  Have a look at www.Just1vote.one – it says much the same thing, but share the webpage, tweet @Just1Vote1 join the Facebook event (or search for Just1Vote on Facebook) share it, but most importantly, get out there and have a conversation. We don’t change minds on social media – only conversations do that.

4:  If you are a younger person: talk with those older than you. Young people and their careers, prospects and finances will be disproportionately affected by any UK exit, and are already those who will be disproportionately affected by climate change. Yet the middle-aged and elderly are most likely to vote Leave. There are already a number of heartwarming stories on social media of grandparents saying to their children “it’s not about me, its about you; which way do you want me to vote and I’ll vote that way” – and switching to the Remain campaign as a consequence. Speak with your older family members and urge them to Vote Remain, if not for themselves then for you and your children.

It has been stated repeatedly that this is a once in a lifetime decision for the UK, that will have huge repercussions in the event the UK should vote to leave the EU.

The repercussions for national and global action on climate change are just as high.