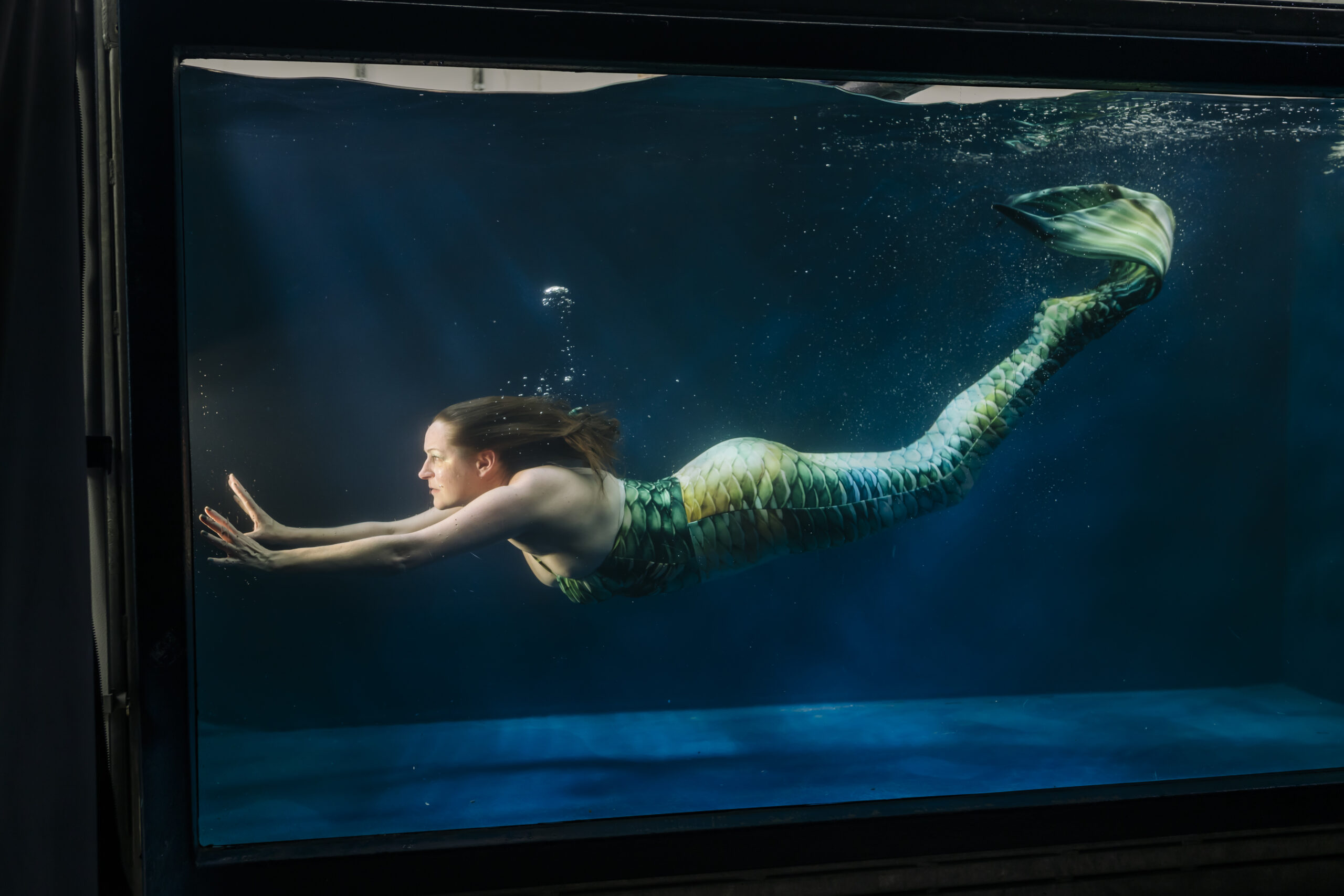 Lucy Meredith is a self-proclaimed Mermaid and Co-Director of Yorkshire Life Aquatic; a social enterprise that uses creativity and performance to promote health, wellbeing and environmental causes. We had a chat with Lucy about how Carbon Literacy goes ‘hand in tail’ with her work as an Eco-artist and with the wider work of creatives communicating about climate change and its interconnected challenges.

You’re a professional mermaid! What does this mean and how did it come to be?

“It began when me and my business partner Zoe set up Yorkshire Life Aquatic. She’s from a choreography background and I come from a synchronised swimming background, so we came together on our love for performance and water.

Our Human Aquarium project started off being about animal captivity. I was appalled by SeaWorld keeping sea mammals in concrete prisons and the effect it had on them, so we wanted to get people to relate to how it might feel to be a dolphin or an orca in captivity. To do that, we started using images of mermaids in captivity. We then began looking at the impact of plastic pollution, like plastic islands, on sea creatures too.”

Why did you decide to highlight ethical and environmental issues in such an inventive way?

“The audiences we perform to are very wide and varied, so we wanted to offer something that’s more accessible for people. Instead of giving people facts and saying, “you’re bad for using plastics”, we wanted to use a story that is more likely to get a message through to people by making them curious and open to asking more questions themselves.

It’s a lot easier to have more influence on people when they have a curiosity and an interest themselves so they can make their own changes. It’s more about giving them choices and food for thought. I think creatives and arts organisations can play a really good role in communicating these issues.”

Can you elaborate on the role you think creatives can play in communicating these issues?

“We have a good part to play as creatives in reaching people who maybe aren’t that interested or don’t know much about climate change and would switch off if someone started to talk at them. It’s about finding ways to tell the story in a creative way, and I think we have an advantage there.

I did a lot of research into human behaviour change to be able to answer the question: “how do you change people’s minds?”. People respond to questions, they don’t respond to being told what to do – they shut down. My role as a creative is to open up discussion and curiosity so people don’t feel threatened and so they can ask questions, find out things, and even make mistakes, but without being judged for it.

For example, we did our exhibition in a shopping centre – we took over an empty shop unit – because sometimes art spaces can be intimidating for people. It made people come up to us and say, “What are you doing?” or “Why are you doing this?” We wanted people to have a nice experience, and if they then ask questions, even better! We got really good feedback from people who came out and said, “I never thought of it like that!” So it created a different narrative for people to engage with.”

Why did you decide to undertake Carbon Literacy training?

“A lot of the work we do is to do with plastic pollution in the sea and single-use plastics, and this issue is highly connected to carbon. Our task now is to communicate that bigger picture, so it was a bit of a no brainer for me to do Carbon Literacy.

Although we’re a micro-company, we’re still trying to do our bit to get that message out there. As artists, we want to tell that story. Climate change is such a huge issue, so having more information and more knowledge is essential for me in my various jobs – I work with other climate change organisations like Zero Carbon Yorkshire and Climate Action Leeds. So it was about making sure my knowledge base is as wide as it can possibly be.

Yorkshire Life Aquatic is a member of Sustainable Arts in Leeds (SAIL), so when I saw the Carbon Literacy training they offer, I thought it ticked all the boxes.”

How has your Carbon Literacy training impacted your work?

“Carbon Literacy features heavily in our plan for the next stage of our project. Particularly with the more technical stuff, like lighting and voltage for exhibitions, which I think about more now. With the last project we wanted to keep it plastic-free, but I didn’t think about that in terms of its carbon footprint, so now I’m more able to think in these terms.

For me the next stage would be, “how do I create a net-zero carbon project?” I don’t quite know yet how I’d achieve that, but it’s made me think outside the box a bit more. For instance, next time, could we have a bike-powered exhibition where people have to pedal to light it up? That way, by getting involved, people can understand how much work it takes to create power.

Carbon Literacy has made me think about taking it further in terms of making net-zero exhibitions, and how that could be a really exciting challenge for us going forward.”

What do you think creatives have to gain more generally from being Carbon Literate?

“As performers, when we do a performance we have to do a risk assessment, but I think people should be doing a carbon assessment alongside that.

For example, when we did the Human Aquarium, we had a huge space to fill and light, but we only had one plug socket to use! So we had to get an arts electrician to work out how, with such little voltage, we could create an exhibition with great mood lighting. Through that, we learned about LED lights and how great they are. Now we have amazing energy-efficient spotlights that we can take around with us and we know they won’t use much power. Things like that need to be part of risk assessments, and that’s one thing I now bring to the table when I work with other companies.

Carbon Literacy needs to be embedded. We’re all in this together, you’re either part of the problem or part of the solution. And once you start doing this, other people will follow suit, or they’ll ask about it, so it’s all about sharing that knowledge.”

Do you have any advice for other artists or creatives considering Carbon Literacy training?

“I would definitely do it because not only will it benefit you as a person, but it will help you understand how to connect all the dots and make a longer-lasting change. It’s really important to connect it to the global problem that we are all part of.

One thing that makes me sad is seeing that there are all these people trying to make a difference but they are being limited by a lot of the policies that are in place and the big companies who are not very ethical. There needs to be a complete and utter system change, both from the bottom up and the top down.

But that doesn’t mean that we should give up, it means that we need to get more people on board. So do it for yourself, as a human being, and to make your sphere of influence bigger, and so we can be more united.”

You mentioned you’re part of various community climate action groups, including Zero Carbon Yorkshire and Climate Action Leeds. What work do you do with these groups and why do you think they’re beneficial?

“Zero Carbon Yorkshire is a small charity dedicated to supporting the many local community climate groups within Yorkshire doing brilliant work; tree-planting groups, clean air groups etc. It’s all about sharing expertise, knowledge and skills. We pay attention to perspective and how issues are framed, so guidance is offered in a way that is relevant to the audience and empowers them in the process.

Climate Action Leeds is a lottery-funded, 5-year project aiming to create a zero-carbon, nature-friendly and socially-just Leeds by the 2030s. It looks at creating community hubs around Leeds to help people bring down their carbon footprint. It’s really people-focused and Leeds is a big city, so it’s lovely to be part of that.

I also want to mention Leeds Creative TimeBank. It’s an arts-based skill-sharing project modelled on a cashless economy, so it values time over money. Taking money out of the equation promotes looking at people’s value as humans and what they can do for each other. It’s been really helpful for us as a company and it’s just great to be a part of – I’m not money-focused and I don’t want to be part of that world, I want to be part of a world that’s people-focused.

I think Carbon Literacy needs to be embedded in all these kinds of organisations.”

We can’t wait to see what the World’s First Carbon Literate Mermaid does next!