Why We Support the Love Your Bike, ‘Getting Moving’ Campaign 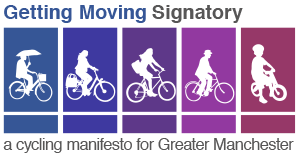 We support Manchester Friends of the Earth’s Love Your Bike, ‘Getting Moving’ Campaign. The campaign wants to get “more people cycling, more often, for more of their journeys.”

Launched in 2012, ‘Getting Moving’ aims for Manchester to become “a cycling city, and achieving the target of 20% of journeys under 5 miles being made by bike by 2020.”

One of 30 signatory organisations, we support the campaign by providing volunteers with a bike travel allowance which is equal to that of their public transport costs.

Many companies provide travel allowances for vehicle fuel receipts, or for ticketed travel on buses, trams and trains. However, when individuals choose to cycle, they can often end up out-of-pocket by the simple fact that they don’t have a physical bill to claim against.

That being said, for all its benefits, cycling does incur costs. Firstly, there is the initial purchase of the bike and safety gear (if not already owned). Then there are extras that need to be considered such as panniers to bring in what’s needed for the day’s work, and maybe a mud-guard to protect clothes from splatter. The bike also needs to be maintained – oil for the chains, puncture kits and repairs for the tyres, even a full bike check after a close-call with a pothole!

We provide the bike travel allowance as it encourages volunteers to use an active, lower-carbon mode of transport when compared to driving, or public transport.

What this means to our volunteers…

Fiona Ieong – “Receiving a cycle travel allowance makes travelling easier, means that I don’t have to pay for [car] parking, and avoid all the traffic at peak times. It’s also good to be moving rather than waiting for the traffic.”

Toby Harrison – “I commute from near Beech Road in Chorlton, and it is, in fact, quicker for me to cycle in than to get the Metrolink, which makes mornings less stressful. I have also found this to be true when travelling around Manchester as a whole – cycling gets you there faster. The fact that it is great daily exercise and saves money is a bonus!”

Delphine Rumo – “Cycling, for me, is a great way to stay healthy while reducing my travel time to The Carbon Literacy Project office. Being reimbursed definitely encouraged me to ride my bike rather than taking a bus, which is not only beneficial for me but for other road users and the general air quality of the city!’

You can join the campaign at – http://www.manchesterfoe.org.uk/loveyourbike/become-a-signatory/