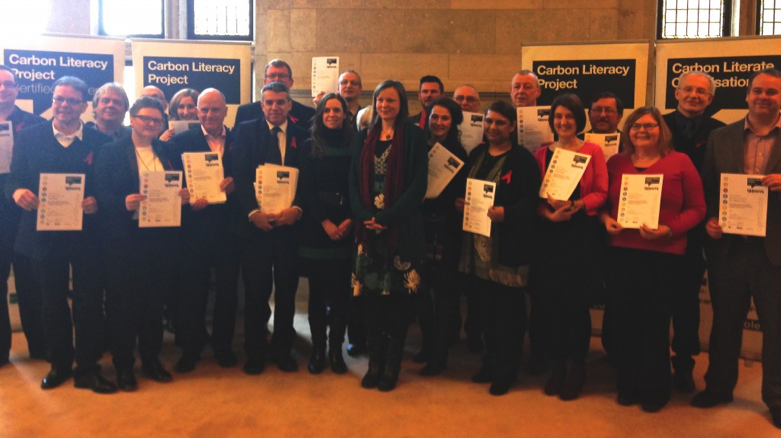 Last week we were privileged to attend the graduation of a group of 20 Manchester City Councillors, in Manchester Town Hall, and watch another successful batch of learners posing proudly with their Carbon Literacy certificates in the Council Antechamber.

Having Carbon Literate councillors is a powerful asset to the city of Manchester. As elected members, councillors do not work directly for the City Council, but directly decide its policies and strategies, and thus have a unique opportunity to influence how the city runs, and how quickly we make the transition into a low carbon city.

The newly graduated councillors can now apply the knowledge gained through their training to their work; in planning, in scrutiny, with schools, transport, waste and and all of the services overseen by the council, and delivered to the people of Manchester.

The event was led by Councillor Jeff Smith, who said afterwards:

“I’d like to congratulate my fellow councillors for working hard to get their Carbon Literacy Certificates – I did the course and found it informative and motivating.”

“The challenge that we need to take up now, is to use our new knowledge to influence others; in the Council and the many other places where we work, such as schools.”

“I look forward to the time when we can boast of Manchester being the world’s first Carbon Literate City.”