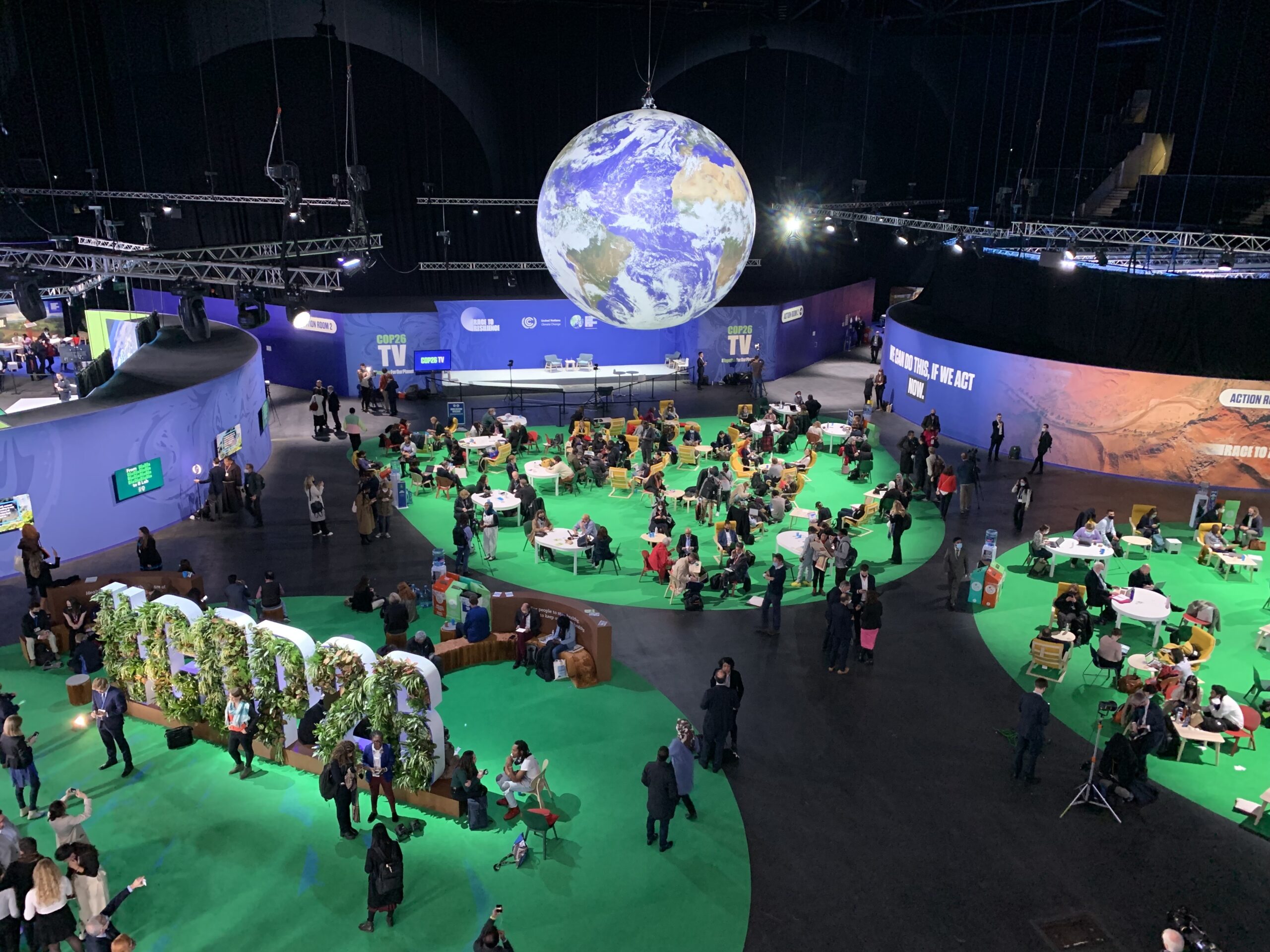 As an organisation, we were lucky to have a good spread of experiences across the two weeks of COP26; with some of our team attending as Observers in the Blue Zone, others in the Green Zone, as well as running a full programme of online events for those who couldn’t physically attend the conference in Glasgow.

Being held so close to home (in Glasgow, UK) COP26 was an extremely unique and illuminating opportunity. With so many of our team able to get involved and be able to meet so many people and organisations in such a short space of time with such similar missions to ours, it was a fantastic learning opportunity. Whilst there were many positives for us as an organisation, we would be remiss to not talk a little about the overall narrative of COP26 which we are acutely aware has been largely negative.

Negatives
In the Glasgow Climate Pact (the agreement reached at COP26) there were multiple failures to go far enough in reducing national, and therefore global, emissions in line with what the science demands in order to mitigate against the worst impacts of climate change. This was largely characterised by the watering down of wording in the final agreement, alongside flat-out failing to mention the phase-out, or ‘down’, of other fossil fuels.

Discussions at the conference also lacked a sense of accountability, which was incredibly disappointing, with countries historically responsible for emissions failing to accept that responsibility. This resulted in missed opportunities to provide vulnerable and developing nations with the remuneration needed, both to develop in a way consistent with the zero-carbon society we’re looking to create and to enable them to prepare for and adapt to the unavoidable impacts of climate change.

Many, commenting on the lack of representation at ‘the most inclusive COP ever’, cited gatekeeping due to the requirement to have had two doses of a covid vaccine in order to attend. As a result, indigenous populations were some of those least represented, whilst being some of the most impacted by early impacts of climate change. Lack of childcare facilities fuelling gender inequality, lack of youth representation, alongside issues around accessibility for wheelchair users, have all highlighted serious concerns about the inclusion of various groups (or lack thereof), which must be addressed in future meetings in order to ensure participation from a wider representation.

Positives
However, looking at what was achieved during the two weeks, there were some key outcomes that were hailed as a success. Firstly, the ‘Glasgow Climate Pact’ that emerged from the summit was welcomed by many for its commitment to doubling adaptation finance and requesting countries to present more ambitious climate pledges next year. Though this doesn’t go far enough, it does move us on from where we were and sets the expectation, going into COP27 in Egypt, that greater pledges with deeper emissions cuts will need to be made.

As Carbon Brief put so astutely: “COP26 has achieved more than expected but less than hoped.” We had all hoped for so much more than achieved, with the goal of 1.5 degrees ever in our sights – and it still is! And yet, for many, the thought of what happened in Copenhagen where no global agreement was reached – and the resulting vacuum within the climate sphere for years after – to have achieved something, which all nations agree to, which moves us in the right direction on climate change, is far more than hoped.

Building on the agreement in place, there was a rallying call for the decentralisation of leadership, enabling anyone anywhere to take ownership of what needs to be done and step up to fill the gap. Where we are currently lacking in national leadership, in many countries including the UK, there are hundreds of thousands of individuals and projects taking their own action and directly taking a leadership role in tackling the climate crisis. This is something that particularly resonated with us, as Carbon Literacy facilitates just that by equipping people with the knowledge, skills and motivation they need to feel empowered to take action within their place of work, education or community.

It was further recognised that the people are leading the charge in many ways, with thousands gathering (around 100,000 by some accounts in Glasgow alone) to protest the lack of action at the conference, during the middle weekend. Societal consciousness has been through an awakening in the last couple of years and we’re starting to see a cultural shift towards a zero-carbon society; this is ultimately what will lead to decisive national government action, as governments will largely favour policies that will garner public support.

We know that people’s mindsets are changing and at different rates – even if slowly! Collective motivation has undoubtedly increased, exemplified by the sea-change we have felt. Undeniably, waves of change can feel uneasy and inconsistent at times. A sudden surge of action followed by a time of quietly working away in the background can feel frustrating and not feel as exciting, as if things are progressing, or convey that same sense of togetherness. However, even in those quieter times, as the wave heads back out – in reality, the tide is still coming in – and every new wave is a new high tide mark. So although the wave of COP26 is over, the next wave is coming, and the tide of climate progress and action is still coming in.

So, though we are under no illusion of COP26 being a raging success, it was certainly not a car crash – and this gives us reason to hope. It also reminds us that due to the work done at COP26, we are closer than we were before in reaching our target to limit warming to 1.5C.

The Blue Zone – the UN area in which the negotiations take place – saw over 40,000 delegates attend. As an official Observer Organisation, The Carbon Literacy Project were able to sit in on the negotiations as they were happening and ‘observe’ the process, gaining a direct insight into how the negotiations work. Beyond the negotiations, there were talks, events and working groups to get involved with. A highlight for us was getting involved with the Action for Climate Empowerment (ACE) working group, which our work aligned greatly with – the six elements of ACE being: Education; Training; Public Awareness; Public Access to Information; Public Participation; and, International Cooperation. We were delighted for our new friends that the Glasgow ACE Programme was adopted, opening the door to further development of Action for Climate Empowerment, which we hope to support more closely, through our work, moving forwards.

We were also thrilled to be able to meet and interact with many like-minded organisations in the COP26 Green Zone – the public, civil society zone. Below are a few personal reflections from members of our team that were able to visit…

Nicole Baldwin: “I found the Women’s Institute stand at the COP26 Green Zone inspiring! An organisation with a rich history and over 200,000 members across the UK has an unsurprising scope for influence regarding issues such as climate change. One of their initiatives encouraging change at the individual level was asking attendees to make their own pledge right there at the Green Zone! After chatting with them, I found out that the WI has a longstanding environmental protection agenda, and actively work in tandem with policymakers to meet government/local climate change targets.”

Chloe Andrews: “Going into the Green Zone I was pleasantly surprised by the amount of art, music, poetry and film available to enjoy. In my couple of days spent there, I got to sing with Brian Eno, watch readings from Poet Laureates and learn about musical instruments that I’d never heard of before like the Balafon (shout out to Glasgow African Balafon Orchestra!) I think that the arts are essential in communicating science and climate issues to the masses and these Green Zone events provided a much-needed release during two weeks of worrying news articles.”

Catherine McGinn: “Having the chance to go to COP26, with it being held in the UK, was an amazing opportunity and my overall experience was an extremely positive and memorable one as it was my first time at an environmental conference or event. The Green Zone was filled with inspiring people, organisations, showcases, stands, events and artwork. I particularly loved seeing the range of organisations that work so hard to tackle climate change from a variety of lenses. While we are focused on climate education and action here at The Carbon Literacy Project, there were all kinds of organisations present who fight for different causes, including humanitarian issues, damage and crisis management, marine biology, wildlife & nature conservation, astronomy & space exploration, and water conservation. It was a necessary reminder that, after being in lockdown for almost 2 years, we are not alone in fighting for this cause. Furthermore, as someone from Northern Ireland, another highlight for me was meeting many people and organisations who are working so hard to improve NI’s resilience in fighting climate change. In Northern Ireland there is currently no legislation in place for tackling climate change – this means our government has neglected the issue, and as a country, citizens and organisations are left to their own devices. Without guidance, leadership and targets, this can be very difficult to do. However, it gave me so much light and hope when talking to so many inspiring people and voices who are doing brilliant advocacy work through creating their own agendas, targets and goals to offer a positive future for us all.”

Caelan Knight: “Marching through Glasgow with over 100,000 people on the Global Day of Action was incredibly moving and inspiring, especially with its focus on climate justice. Understanding how the effects of climate change will disproportionately affect people of different (dis)ability, ethnicity, gender, class, and their intersections, and taking action to change this, is essential for achieving a just future. Some particularly inspiring fringe events I attended were organised by WEN and COP26Coalition on feminist climate action. These events went beyond simple panel discussion, to promote direct action, audience discussion and solidarity-building. At WENs event, the Climate Sisters presented their creative ideas for “what a green caring economy could look like”, demonstrating how social and environmental issues could be tackled by reorientating our economy towards one of care work. At the COP26Coaltion Feminist Movement Assembly, the audience was invited to breakout into groups and develop their own specific actions related to issues of feminism and climate justice.”

Whilst many of our team were physically in attendance at the conference in Glasgow, the rest of the Carbon Literacy team did a fantastic job of hosting a variety of online events over the two-week duration. Kicked off by the hugely successful Carbon Literacy Action Day – where in total, 502 learners concluded their CL training across the globe on a single. We followed up this day of action with sector-specific focus days, featuring testimonials from our Carbon Literacy community. As ever, none of what was achieved could have been done without the incredible support, motivation and action delivered by the wider Carbon Literacy community, and we’re incredibly appreciative of the hard work on all sides that went into our online events programme. If you’d like to catch up on any of the programmings, please visit our Youtube channel, where you can find most of the recordings ready for viewing.