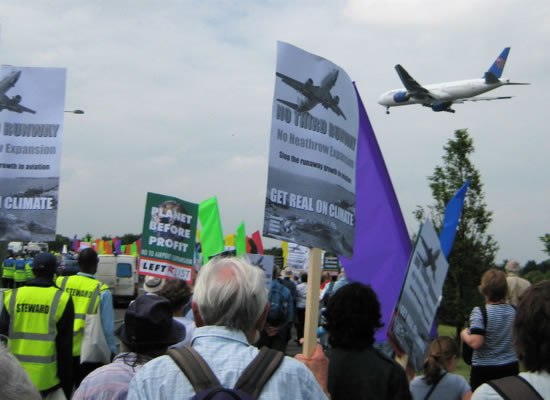 Today marks a major win for environmental campaigners, as the Court of Appeal has ruled plans for a third runway at Heathrow Airport illegal. For the first time anywhere in the world, the court took into consideration the Paris agreement, explaining that ministers did not adequately take into account the government’s climate change commitments. The expansion, which could have brought 700 extra flights per day, along with their carbon emissions, into UK territory, would directly jeopardise attempts to meet the UK’s decarbonisation targets. On top of this, larger volumes of traffic and higher levels of both air and noise pollution were major concerns for those living nearby. Opposers to the airport expansion have long argued that the UK’s 2050 net-zero emissions target, set in law, are challenging enough, even without any added aviation expansion. The science has shown that deep and drastic cuts to carbon-heavy industries will be required if we are to nationally, as well as globally, keep warming to (ideally well-below) 1.5’C.

This historic ruling essentially puts the health of the planet and all living beings above economic growth. Looking to the future, this may have an impact both in the UK and around the globe, potentially inspiring challenges against other high carbon projects on similar grounds. Earlier this month, North Somerset Councillors rejected Bristol Airport’s expansion plans, in an 18 – 7 majority. In voting against the expansion they cited potential environmental harm, another strong indication that public concern over the climate emergency, as well as an increase in general understanding, is starting to affect decision-making processes. Public awareness on the climate crisis has risen rapidly over the past year, partly due to increased media coverage on extreme weather events linked to climate change as well as worldwide climate activism attempting to disrupt business as usual.

These certainly appear to be steps in the right direction, and this Heathrow expansion legal challenge has set a path that others will hope to follow. As quoted by The Guardian, “The court ruling is bad news for all businesses and investors in the carbon economy, who will have to factor in the increasing risks of legal challenges,” said Tim Crosland, at legal charity Plan B, which brought the challenge. “But really it is good news for everyone, since all of us – including businesses and investors – depend on maintaining the conditions which keep the planet habitable.”

Going forward, if we are to keep temperatures well below 1.5’C, and maintain the stable conditions necessary for life here on earth, we need challenges to unsustainable development to become the norm. One personal action we can all take to ensure public opinion is taken into account is to write to your MP – urge them to support the low-carbon agenda on your behalf. You could also look to support the environmental groups, such as Friends of the Earth, who helped bring about today’s ruling. If you haven’t yet undertaken your Carbon Literacy training, this could be your first step to understanding what you can do to lower your carbon footprint and bring about wider change in your community, organisation, or any other sphere of your life. If you’re already Carbon Literate, have a look at this blog inspiring you to take the next steps in your CL journey.