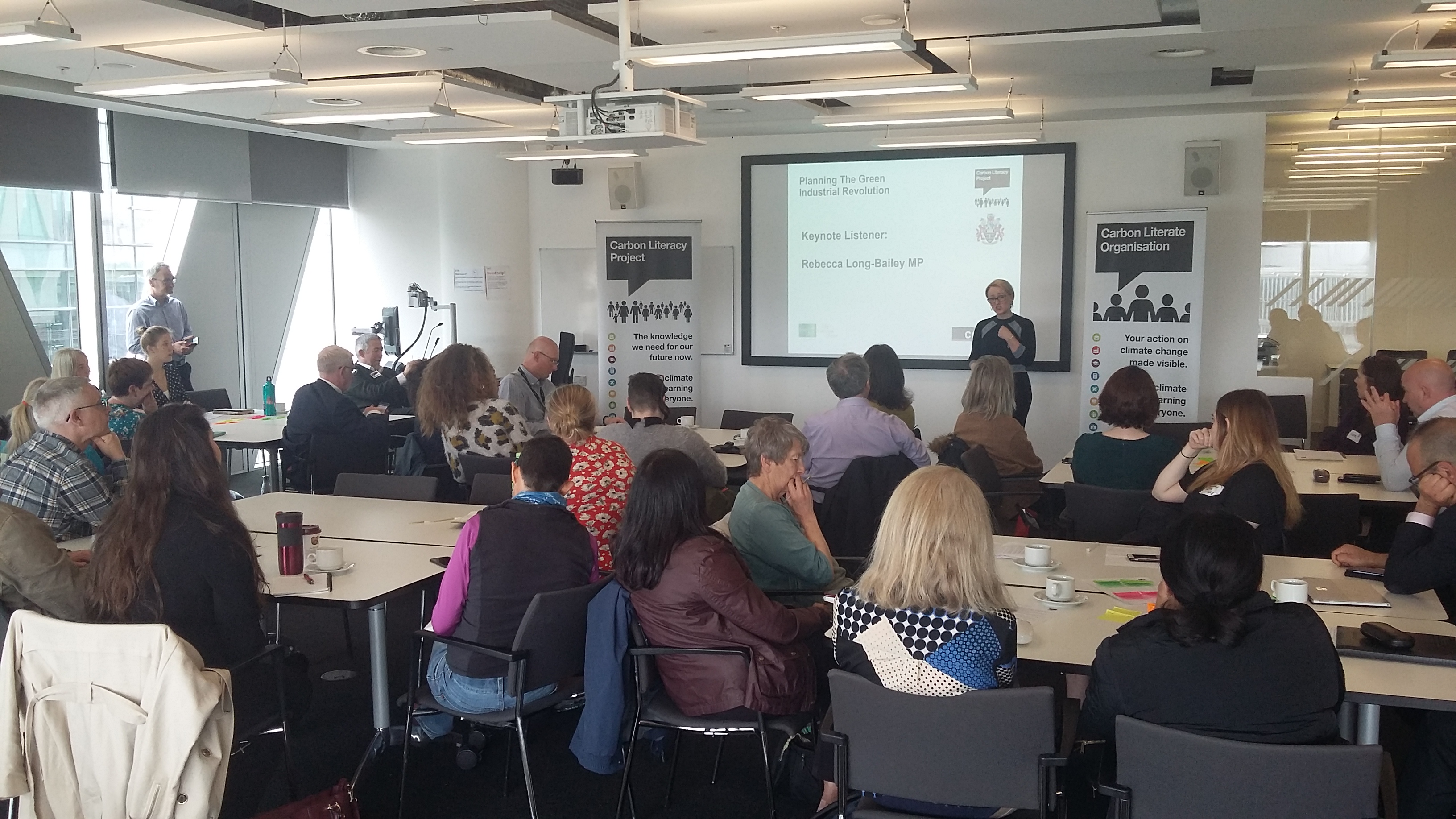 On Friday the 17th of May, the Salford Carbon Literacy Consortium held an exciting workshop at Salford University MediaCityUK – ‘Planning for the Green Industrial Revolution’. The event was designed for groups from across Salford to come together, thinking about what the solutions to decarbonisation within the region and country are, to feed into Labour’s and Salford Council’s plans. Rebecca Long-Bailey, Shadow Secretary of State for Business Energy & Industrial Strategy and MP for Salford and Eccles, was in attendance as Keynote Listener, alongside Salford Councillor Derek Antrobus, Lead Member for Planning and Sustainable Development.

We organise the Salford Consortium as a place for like-minded organisations to meet and share their experience of Carbon Literacy and other climate change initiatives.  When we approached Rebecca to join one of our events, it happened to coincide with her wish to hear what people thought about Labour’s new plans to create a Green Industrial Revolution.

Derek began by talking about the role Salford Council can play in the shift to a low-carbon economy, stressing that “investing in this agenda is helping future generations”. He explained how the Council has three key areas in which they can make the most impact:

1. How the city council manages its own estate?
2. How they regulate others?
3. How they can lead on the sustainability agenda within Salford.

Partnering with Co-Wheels has been one part of reaching their sustainability goals so far; the programme offering electric car-sharing to all staff at Salford Council, relinquishing the need to have physical ownership of a fossil-fuelled vehicle.

It was great to see the diversity of sectors on the day – with individuals from education, health, construction, transport, and the community (as well as many others) represented, by individuals both regular and new to the consortium – as well as the number of Carbon Literate individuals and organisations who were taking an interest in, and using their knowledge to influence, the future of their locality.

Split into six groups, and guided by a facilitator, we asked each table to come up with two radical actions that should be taken to reduce the carbon footprint of the city in line with the Greater Manchester 2038 carbon neutrality target. One of these actions was for something that could (and should) be enacted immediately for immediate carbon savings, the other something that’s so radical we should start working towards it now so that it can be in effect within the next 10 years. The groups focused on four categories: Energy, Transport, Buildings and a catch-all ‘Other’ category. Delegates were tasked with ranking their ideas on an axis in terms of – ease of implementing, and its potential impact towards carbon reduction The most favourable ideas were the easy actions that have a high impact, the ‘low hanging fruit’, which should be so simple to enact they make you think, “why aren’t we doing this already?”. It goes without saying though that by going for the big, easy wins now, we are helping to conserve the carbon budget for as long as possible, and hopefully be making some long-term cost savings which can come back to help out with the more difficult to implement actions later down the line.

During the workshop activity, as keynote listener, Rebecca Long-Bailey moved between each group, hearing ideas and joining the discussion, after which she fed-back some of what she had heard to the room. Making many great points, she focused on how we’ve been conditioned over the past 30 years to believe that the environment is here to serve us. This is where a combination of system changes and a psychological and behavioural shift in society is most needed, changing our perception of the planet and how we rely on the ecological system it supports (including ourselves!). Rebecca agreed that we can decarbonise our public transport network quickly. Although it will involve a large initial cost, skilled workers and government support to deliver, this will in turn create jobs, and the payoff will be huge.

Rebecca acknowledged frequent flyer proposals (such as a tax or levy if flying more than once per year) as something the government should be looking into as it could really make a substantial cut in emissions, whilst enabling the funding of other low carbon initiatives such as hydrogen-powered public transport and further electrification of the railways. The fact that it’s often cheaper to fly to London than get the train was also recognised as “absurd”. Affordable, low carbon public transport needs to be made a national priority because it should be a basic service that all the public can access and view as a viable option. It shouldn’t matter if certain routes aren’t profitable because it is there to serve the public, and should be focused on maximum convenience for those using it, she said.

Education is also a key part of the next steps to decarbonisation. Educating different groups helps individuals to understand what they can do within their own sphere of influence, whether that be:
private landlords in terms of retrofitting properties; government departments so that policies can be created and enforced that align with the science-based targets; as well as, perhaps most importantly, mass public engagement so that no one feels they aren’t a part of the discourse or are left behind by these changes. This is where Carbon Literacy can bridge the gap, empowering people with the knowledge required to understand why changes need to be made, the ways they can get involved with taking action, and how to further communicate action on climate change to others.

As Rebecca Long-Bailey concluded, “This is a future worth saving for our children”, and quite simply building a much better version of the society we currently live in. “Declaring a climate emergency isn’t enough” – we need to follow this up with immediate action, driven largely by dramatic national and local government investment and policy, and we’ll soon see investment from businesses follow.

Our full write-up from the workshop will be submitted to Rebecca Long-Bailey’s office to feed-into planning and solutions around the Green Industrial Revolution, and will be made publicly available shortly.