The News Cycle Will Kill Us 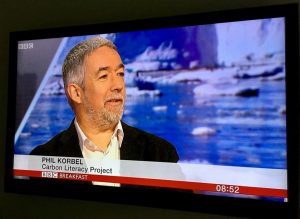 Once upon a time I pitched an amazing documentary idea to the Controller of Radio 4. A documentary about huge chunks of rainforest being handed back to its indigenous owners by an Irish-German Colombian anthropologist turned politician.  The controller smiled, glanced over the story and declared ‘My listeners have had enough rainforest.’   Rainforests  were yesterday’s story. The news cycle had rolled on.

This morning I was on BBC1 Breakfast sofa, reacting to the historic IPCC report released today.   That meant I had paid quite a lot of attention to the BBC coverage of the report, and I have to say that the combined authority of Messrs Shukman and McGrath – and assembled scientists – did rather well.  For a while the story polled just behind a story about Taylor Swift as “most read” on the BBC News website;  no mean feat in itself and with the long overdue absence of the narrow climate-denier lobby, we’re finally seeing the quality of coverage that we need.  All credit also to the climate change for journalists training that’s going at the BBC too.

I was invited on air to comment about what people can do. Not just me, but extraordinary young advocate and CL Trainer Chloe Andrews.  Two out of three places on the sofa given over to Carbon Literacy people! Not bad!  Chloe spoke from the heart of her frustration at the slow pace of change and I chipped in about a low carbon world being a better world and the need for us all to be able to look our children in the eye and say we did our best. The third interviewee; Angela Terry of Our One Home, was also excellent in her passion and expertise.

A lot of people will have seen and heard our messages.  There will no doubt be more discussion and headlines for the rest of the day, but; what about after today?  Will we be back to disappearing Chinese police chiefs, crashed limos and Taylor Swift? Which is not to diminish those stories but…

Like the rest of science, climate change doesn’t go away when we’re not looking, and much of what we’ve got to do about it is, by its very nature, repetitive and not headline-grabbing.  So how do we keep this in the headlines, or if not the headlines, at least in the media?

I’ve been sworn to ‘omerta’ on this, but one of our favourite soaps could well be worth watching during next week’s Green Great Britain Week…. (hint). Will the story-lines be any good? Will they last beyond the week?  Stay tuned. But again, will there be sustained coverage?  Where’s the consistent inclusion of climate action across our media in a way that’s commensurate to its relevance to all areas of modern life?  We need to see energy efficiency ratings across every house in Location Location Location, good miles per gallon celebrated in Grand Tour and the relative carbon footprint of every dish noted in Masterchef.   This, and more storylines in our TV dramas, will be essential, if the voracious appetite for novelty in the modern news cycle, isn’t simply going to kill us.