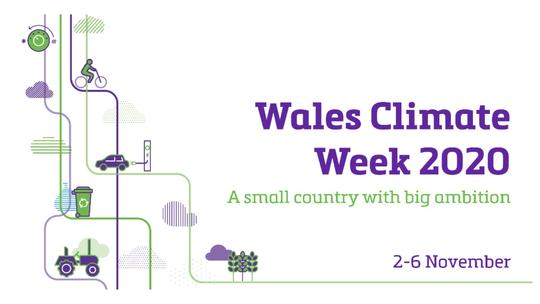 For the first time, across the week of the 2nd-6th November, the Welsh Government held a series of free, digital and interactive events on climate action. It was a chance for anyone passionate about climate change to join conversations with national and global policymakers, campaigners and innovators, about how climate change can be tackled. Some of our volunteers took the opportunity to attend a session which interested them most, and have shared their thoughts and key takeaways below.

Climate change is a global issue so international partnerships are vital in working to achieve solutions. Tina Völker, one of the speakers from the Ministry for Economic Affairs, Innovation, Digitalization and Energy, of the State North Rhine-Westphalia (MWIDE), based in Germany, spoke about how important international collaboration is as there are similar issues facing regions all over the world. Sharing knowledge and promoting cooperation between governments and initiatives allows for best practices to be shared to help the economies and reduce emissions.

Both Elspeth Jones (Size of Wales) & Patricia Fuller (Canadian Ambassador for Climate Change) gave great examples of community-based initiatives in Uganda and Canada where the local people have had an input in the projects. In Uganda, Size of Wales aims to plant 3 million trees. The trees planted have already shown great economic and environmental benefits to the local community, including increased crop yields and farmers improving their farming practices. Lesley Griffiths, Welsh Minister for Environment, Energy and Rural Affairs, said that Wales was one of the first countries to declare a climate emergency. For Wales and the United Kingdom to reach the carbon reduction targets, the government cannot do it alone; businesses, communities and individuals all have a part to play.

The session was very informative, interesting and positive. It was great to see ambitious targets and pragmatic implementation strategies from local organisations, as well as industry giants such as Amazon and BT. These solutions for high-emission areas such as transportation, buildings and energy production, as well as outlines for further investments in further technological developments, infrastructure and ecological regeneration schemes, was overwhelmingly positive. Not only do these plans and proposals provide a benchmark for competition – helping shape sustainable industry and market norms – but they make the task of becoming net-zero within 30 years seem more likely and more rewarding than some may think. Furthermore, the thousands of jobs outlined from their proposals make it a win-win situation for the environment and Welsh society.

Western Power’s plans to tackle the lack of high power EV charging infrastructure seemed very appropriate and useful, as it will help encourage Wales to get behind EV vehicles, and will be attractive for tourists with EV’s too. Their H2 super-fast, less loss-in-transit energy lines innovation was a great addition too, given the scale of emissions that can potentially be saved nationwide, and potentially even wider, just through increased efficiency. Wales and West utilities had ambitions to utilize sustainable gas, such as their plans for creating the world’s first carbon-free gas grid with H2 and bio-methane, which is potentially world-changing stuff. However, the coolest (or hottest) was the Hycompact project for installing greener, more efficient boilers/heat pumps which do not even require skills retraining for engineers to be able to install – simple and effective in practice! Their ambition to transform Milford Haven to a green energy hub, rather than a fossil fuel hub, was also very admirable.

The biggest wow factor came from Wales Hydrogen Trade Association who demonstrated how the potential of wind-generated power in the UK far exceeds the requirements of the entire economy and demonstrated how the entire UK could be powered cheaply, cleanly and consistently by renewable energy, without even including all the other fantastic innovations in renewable energy!

Climate Change – Who’s Responsibility Is It?
04/11/20 – attended by Jack Rhodes-Worden

In this session, representatives from four organisations came together to discuss their thoughts on the practical ways forward in the fight against climate change. The four organisations were the Centre for Alternative Technology, Extinction Rebellion, Friends of the Earth Cymru, and Cytûn (Churches together in Wales), which offered a really diverse set of perspectives on the actions that could have a positive impact on climate change. Their responses were as distinctive as they were exciting…

Sian Cox of Extinction Rebellion professed the potential of deliberative democracy in the form of Citizen’s Assemblies – groups of people brought together to represent a cross-section of society, to hear from experts, and to make recommendations to our government, a bit like a jury in court. Cox believes that these assemblies are a great way to make complex, long-term decisions in a system which favours short-term results within a five-year electoral cycle.

Haf Elgar of Friends of the Earth Cymru spoke about the crisis at the local scale – particularly how we can think globally, and act locally. Elgar spoke of the success of local chapters in working with their local authorities to prepare climate emergency action plans, noting that people have been inspired to become involved in climate action due to the hyper-local nature of this kind of response – because it feels relevant to their lives.

Gethin Rhys from Cytûn spoke about a unified Church response in Wales, through ‘Climate Sundays’, a year of climate action at communion – exploring the theological and scientific background of climate-care with congregations, committing as a church to take long-term action, and speaking up as a community to demand a greener, fairer future.

Paul Allen from the Centre for Alternative Technology spoke about ‘wicked solutions for wicked problems’ and focused particularly on the feedback loops that could help solve the climate crisis. These included the need to imagine a zero-carbon future, which could unleash new thinking (in his view “if we can’t imagine it we won’t create it”), and the need to scale up on solutions such as wind power and reforestation, because the more we scale up, the cheaper solutions get, and so on. Perhaps his most interesting point, however, was the feedback loop of new leadership – the more people that are inspired to take action on the climate, the more this will feedback, empowering others to do so. All in all, this was a really inspiring session, offering a range of perspectives on the actions that we can take at different scales to fight climate change.

In this talk, artists and writers spoke of the narrative told about the climate emergency, with themes ranging from the pandemic to the US election, psychology to creativity. A key focus of this talk was on how narrative can change. In the last few years, there has been a surge in awareness of the climate emergency – people are increasingly concerned and are becoming more engaged. More recently, as a result of the pandemic, people have started to reconnect with nature, and we should not want to return to the way things were before. However, there remained to be a disconnection between knowledge/awareness and our everyday life. It’s very easy for us to get desensitised as climate change can appear largely invisible throughout day-to-day life. A failure of our collective imagination is not seeing our individual roles and the impact it can have.

But, as the pandemic has shown, our individual actions do make a difference. We should think in the same way about climate change. The speakers discussed collective storytelling, in which everyone is a part of the story – the story of imagining and building a world that we want to live in tomorrow. It was suggested that we must all find our role in this based on our talents. Interestingly, the speakers expressed the importance of psychology in all of this; drawing from personal experiences, they acknowledged the difficulty of battling with our own complicated lives in the wider context of the climate emergency. It can lead to a point of despair. However, they communicated the importance of feeling in control and doing at least something small (as little as putting on an extra layer and turning down heating a degree or two, if that’s all one can do). But the important message was to not be passive and resort to hopelessness. One of the speakers expressed the value of writing, and how it can empower – sometimes even more so than reading. Writing can help to find a meaningful way forward allowing people to become active in the battle against the climate emergency. The talk was beautifully finished with one of the speakers reading an inspiring ‘Letter to Earth’, which concluded that active hope is not wishful thinking, but essential for survival.

Supply chains and procurement might not be something that crosses your mind often, but if you have bought something or have used a service, you are a part of that (likely complex) supply and procurement chain. The key theme of this session was connection – relating to those products and services, and how their carbon cost was likely much greater than anyone could see. It was, therefore, important to consider the long chain that often comes with supply and procurement, and the carbon footprint of each element in that chain. The good news was that long chains have weak links, meaning there are likely countless ways to lower the carbon impact of a procurement process, which anyone can take once they have the right knowledge and tools. The biggest takeaway was the incredible impact sustainable thinking has had on this sector in Wales, and how the effects of this have been immediate, positive, and of huge importance. Speakers from as far away as Australia explained the aim of turning supply chains from the old model of input > output, to a circular and sustainable system that benefits everyone, whilst simultaneously protects the environment.

Wales offered great examples of how this could happen – from innovative companies who’ve turned ‘waste’ plastic into sustainable and carbon-reducing building material, to university procurement staff who’ve championed a wellbeing and sustainability program, all the way to government-backed initiatives that have helped the public sector pull the ‘levers of change’ to lower emissions. Wales has recognised the opportunities to build sustainable and future-proof supply and procurement chains, which is continuing to produce a culture change that has started with learning.

If you’d like to catch up on these, or any of the other sessions from the week-long online event – you can find all recordings here.