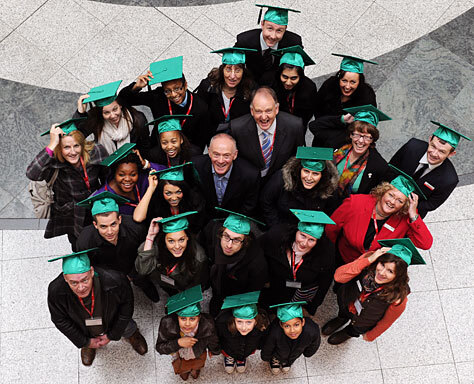 2022 is an exciting year for us here at The Carbon Literacy Project, as it marks our 10 year anniversary. We want to take the time throughout this landmark year to reflect on the years that came before; spotlighting the significant events, people and organisations that were crucial in getting us to where we are today.

So, we’re sharing 10 stories for the 10 years of Carbon Literacy; one story for each year, shared once per month, in the 10 months leading up to the official anniversary date in October. For story number one, we’re heading all the way back to 2012, to the launch of Carbon Literacy.

The launch of The Carbon Literacy Project

On 30th October 2012, The Carbon Literacy Project had its official launch. Although rare these days, as Carbon Literacy has spread internationally across our increasingly digital world, the launch was an in-person affair in the birthplace of Carbon Literacy – Manchester, England.

It was here that the first 50 learners that had taken part in Carbon Literacy pilots, running throughout the city in the year prior, were certified as Carbon Literate citizens. The then Vice-Chancellor of Manchester Metropolitan University, Professor John Brooks, spoke of the “honour” of being part of the Project and presented the learners with the first-ever batch of Carbon Literacy certificates. Recognising the value that Carbon Literacy offered graduates entering the workplace, at a time when sustainability rarely featured on the business agenda, Manchester Metropolitan Business School students were amongst that now historic first cohort.

Also amongst the first Carbon Literate citizens certified that day was Alan Dempsey, the then Waste Coordinator at Manchester Arndale and present-day Project Manager at PrintCity. Alan helped secure the shopping centre – long recognised in the industry for its sustainability and energy management credentials and one of the city’s largest employers – as a venue for the launch.

The presence and endorsement of prominent leaders from across the city was an added bonus. Then Leader of Manchester City Council Sir Richard Leese joined to voice his support for The Carbon Literacy Project, boosting its credibility the general public; a difficult target audience at a time before any significant shift in public attitudes towards climate change.

By the time of the public launch, however, The Carbon Literacy Project had already been a while in the making…

Read more about the conception of Carbon Literacy here.

Manchester Environmental Education Network (MEEN) piloted Carbon Literacy training in schools across the city, including Heald Place Primary School and Stanley Grove Primary School. The carbon saving actions pledged and implemented by staff and pupils gained them their place among the first Carbon Literate citizens certified at the launch event and remain an inspiration to this day as we aspire to further progress our work with schools and the leaders of the future.

“How right it was for us (a decade ago) to seriously start a meaningful conversation about climate change and our carbon footprint. The work, be it pilots the school got involved in with Carbon Literacy, has left a lasting legacy on the way Heald Place thinks strategically and operationally. From that initial raising awareness work (10 years ago) to changing behaviours and building the climate change agenda into the fabric of school improvement, The Carbon Literacy Project has definitely supported our forward planning and thinking.”

As Waste Coordinator at Manchester Arndale since 2009, Alan was already passionate about environmental sustainability, and so was eager to support The Carbon Literacy Project from the word go. Still, undertaking Carbon Literacy training alongside some of his colleagues broadened his understanding of how our activities, both individual and collective, combine and build to impact our climate and environment. Looking back to 2012, Alan said:

“At the time, my remit was just waste management. However, understanding how CO2 was a universal way of measuring emissions helped me to expand my thinking about the impacts all of my activities have on the environment. Not just what I buy and how I dispose of it, but on the things I do – how I travel and even my diet – all have an impact that could possibly be reduced. I think the training helped me to think about and understand embodied carbon properly.”

Armed with this knowledge, Alan felt equipped to make more informed decisions about his actions. Quantifying carbon savings enables you to focus your efforts on where the biggest difference can be made, allowing you to have a larger impact than you might think possible simply acting as an individual. In Alan’s case, this realisation went on to influence his career path.

Around the time of his Carbon Literacy training in 2012, Alan’s position at Manchester Arndale evolved and broadened when he was appointed as their first-ever Environment and Sustainability Coordinator. This dedicated role to cover carbon, water and green travel provided the focus needed to reduce their carbon impact on a wider scale.

In 2014, Alan moved on to work alongside fellow early Carbon Literacy supporters at Manchester Metropolitan University. He spent four years taking on numerous roles involved with waste and recycling management before becoming Project Manager at PrintCity – a 3D additive and digital manufacturing hub based at the university.

In this role, Alan has supported the development and delivery of 6 EU funded research projects, all themed around environmental sustainability, circular economy and digital skills. “If these projects are successful”, Alan says,  “the potential benefit to mitigating certain environmental impacts could be huge”.

Drawing a comparison with The Carbon Literacy Project, Alan said:

“The Carbon Literacy Project helps individuals understand their impacts. Going beyond the individual pledges, these changes will collectively make a huge difference to the environment, reducing emissions and the negative impact we have. If individuals can affect change on their peers, families and work activities, even better!”

Speaking to Alan 10 years on from his experience as part of that first cohort of Carbon Literate citizens, it is clear to see the impression that Carbon Literacy has left on his life. He has pursued a career path chosen for having the highest prospect of large-scale carbon saving. And that can be attributed, at least in part, to the key takeaway he took from his Carbon Literacy training: “individuals can change their habits to make their own personal contribution”.

Whether as part of an organisation or entirely on your own, if you want to begin your own Carbon Literacy journey, take Alan’s advice and just “Do it!” – there’s no better time than today.

Get in touch to find out how you or an organisation you’re part of can become Carbon Literate and take meaningful action on climate change.

If you’d like to share your Carbon Literacy story, wherever it fits within the past 10 years, get in touch at media@carbonliteracy.com.