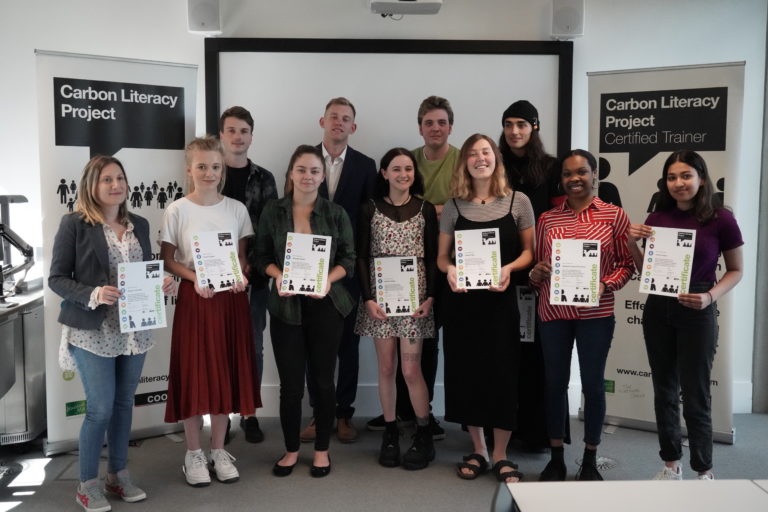 Throughout our 10th Anniversary year, we’re sharing 10 stories for the 10 years of Carbon Literacy; one story for each year, shared once per month, in the 10 months leading up to the official anniversary date in October.

Story number two picks up where we left the first story, at the launch of The Carbon Literacy Project in October 2012; where a close relationship with Manchester Metropolitan University (Man Met) had already begun to be formed.

Reflecting on this time, Jane said:

“I came away from my [Carbon Literacy] training with intense emotion and a need to do something about it. I wanted to make a difference and work around others who cared and who were delivering this training”.

Today, she feels that she is in a very fortunate position, “…in that I care so much about this issue and I get to work on it every day”. But how did this come to be? While a collaborative relationship with Man Met was budding even before the launch, it wasn’t until the following year that Man Met’s crucial influence on the course of Carbon Literacy was set.

In 2013, Rachel Dunk joined Man Met as Principal Lecturer within the Department of Natural Sciences. Manchester’s pro-active approach towards building a low-carbon society (including Carbon Literacy), attracted her to the job. Coming from a background in carbon management, it was a ‘no-brainer’ that she would get involved in Carbon Literacy.

A Carbon Literacy cascade is set in motion

By the end of 2013, with both Jane and Rachel on board, Man Met’s defining role in the delivery of Carbon Literacy training was determined.

Carbon Literacy for students and staff

Carbon Literacy provided Man Met’s Department of Natural Sciences something to coalesce around. By 2015, Jane had moved from the Environment Team to the Department, becoming a Senior Research Assistant in Carbon Literacy; and the first person in an external organisation to be appointed to a defined Carbon Literacy role!

As soon as they began to deliver Carbon Literacy training to Man Met students, a need to scale-up delivery became clear. And so, in Autumn 2015, they launched their pioneering peer-to-peer Carbon Literacy for Students (CL4Ss) model.

“We noticed a scaling issue that everyone faces; we had ambitions to train all our staff and students in Carbon Literacy, but knew this wouldn’t be possible with only two people on the team. We also wanted to develop our students and [Carbon Literacy] is an important employability skill. So we thought, why don’t we train our students as trainers and then it increases our capacity to train – a win for us and for our students – many of whom now work at The [Carbon Literacy] Project!”
– Rachel Dunk, Principal Lecturer, Department of Natural Sciences, Manchester Metropolitan University.

The first CL4Ss training session was “an absolute success” and, in fact, 40% of the participating students are now valuable members of our staff team. Emma Richards, Head of Project Development, was among them and reflected on her experience three years on in a 2018 blog. Helen Filby, Head of Operations, and Chloe Andrews, Higher Education Coordinator, were later alumnae of Man Met and the CL4Ss programme and have also written about their experience of becoming certified Carbon Literacy Trainers. Both highlight the employability skills gained; and it was this aspect, along with the cascade approach, of the CL4Ss training model that was highlighted when the initiative went on to win the Tomorrow’s Employee’s Award at the Green Gown Awards in 2019.

Since it was developed in 2015, over 1,500 students have been certified Carbon Literate through this award-winning training model, which has since incorporated training for Man Met staff and has been accordingly renamed Carbon Literacy for Staff and Students (CL4SS).

From 2016 onwards, Rachel and Jane also began working with lecturers across the University to embed Carbon Literacy within a number of programmes and courses. Haleh Moravej was the first to embed Carbon Literacy in her first-year Nutritional Sciences unit, and leaders of courses including Product Design and Events Management have since followed suit.

That same year, Man Met delivered TtT to CL4RPs – a consortium of 20 housing associations, across Greater Manchester, dedicated to rolling out Carbon Literacy. This included Great Places Housing Group, which have carried on the cascade by delivering training to over 1000 individuals across some 20 external organisations and by co-developing the Carbon Literacy for Social Housing Toolkit, launched in September 2021.

Representatives from Museums Development North West and Manchester Museum also attended this TtT course. Taking Carbon Literacy and running with it, they went on to instigate their own cascade and to co-develop the Carbon Literacy for Museums Toolkit, launched in January this year.

In 2016, with Man Met’s assistance, HOME designed and delivered their own in-house Carbon Literacy training. HOME has since gone on to train over 800 individuals from a wide range of organisations.

In 2017, the Man Met Carbon Literacy team (including members of Man Met’s first cohort of student trainers) were invited to Toulouse, France to deliver both TtT and Carbon Literacy training to ENSEEIHT university staff and students. This marked the first time Carbon Literacy had gone international!

The list of courses Man Met have helped to develop goes on, and the number of Carbon Literate individuals whose training has been assisted by Man Met continues to grow. As of March 2021, Man Met had trained over 2,400 participants from a range of organisations and over 240 trainers, who have subsequently delivered Carbon Literacy training to more than 7,500 further participants.

“The various Carbon Literacy accreditations enabled us to demonstrate our authenticity and credibility, as well as improving our visibility, around all the work we had been doing to build Carbon Literacy cascades both within the university and among external organisations.”
– Rachel Dunk, Principal Lecturer, Department of Natural Sciences, Manchester Metropolitan University.

Reflecting on being on the receiving end of Carbon Literacy training, Rachel said:

“I decided it was still important to do the training in order to stop and assess: Am I resting on my laurels here? Could I be doing more [to reduce my carbon footprint]? And it was also useful to be in the shoes of the learner.”

Rachel also pointed out that “the process of becoming a CLC was itself immensely valuable.” As a Lecturer, she said, “it is always incredibly useful to have your practice observed and to receive feedback and coaching from peers.” Having your Carbon Literacy training observed is a criterion for achieving CLC status that encourages this kind of reflective practice.

But still, the Man Met Carbon Literacy team were not slowing down now they had these ‘badges’.

When asked why they decided to get involved with creating a shareable toolkit for the Education Sector, Rachel said:

“We wanted to do everything we could to address the problem [of climate change] and knew this involved sharing and encouraging people to join the journey. We knew we had good quality, road-tested materials based on robust information. We also know, from students’ own research, that [Carbon Literacy training] is successful in driving behaviour change – and behaviour change is a fundamental part of the solution. We thought if we have something that helps promote that, and makes it easier and faster for other universities to adopt it, why wouldn’t we make it available?”

Since its release in Autumn 2020, 1,524 learners have been certified as Carbon Literate after having completed Man Met’s toolkit course. The training materials have been shared with over 70 organisations, and the course is being actively delivered by universities and colleges in the UK, Australia, America and Bolivia.

Collaboration is key to Carbon Literacy

The importance of collaboration is another reason why the Man Met team continue to support other organisations with Carbon Literacy, despite their already hectic schedules. And this, in turn, is why they are constantly looking for ways to scale Carbon Literacy more efficiently and better facilitate Carbon Literacy cascades. Why? Rachel summed it up best:

“We need a step-change in every sector, in every country, around the world, and [Man Met] see Carbon Literacy as a really important first step on that journey.”