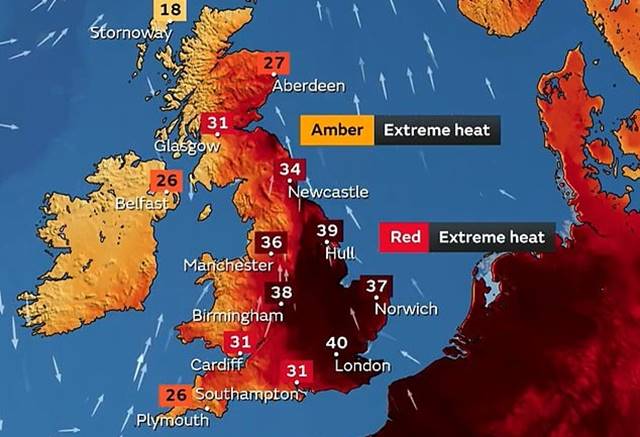 Currently, it is hot! There is no denying that. And whilst some are revelling in the hot weather, most are doing what they can to stay cool and hide away from the heat. But for those of us working in the climate sphere, it’s yet another terrifying reminder that climate change is happening here, it’s happening now, and it’s happening to us.

Even those among us who haven’t been paying attention, start to get the sense that something is severely wrong when…

Simply put – the UK is just not designed to withstand these temperatures:

It’s not just our infrastructure though, our people and services are also affected by the rise in temperature:

Bill McGuire, Professor Emeritus of Geophysical and Climate Hazards at UCL, and climate activist, said: “There’s no getting around it, the UK’s once equable climate is falling apart. We are now firmly on course for hothouse Britain and the signs are all around us… This extreme heat is just the beginning. We should be scared – and channel this emotion into action.”

And this is a message we can get behind. Yes, we should be scared – the climate is changing far faster than scientists predicted and this is cause for concern. But should this mean we do nothing and resign ourselves to a future of increasingly more frequent, more severe, and longer-lasting extreme weather such as this heatwave? Absolutely not!

There is still time to take rapid action to reduce our carbon emissions. What every member of the community, including business and education, requires is the skills, knowledge and motivation to act on the climate crisis. If you’re interested in how you can turn your fear into action, sign-up to a Carbon Literacy course and find out how you can make a difference.