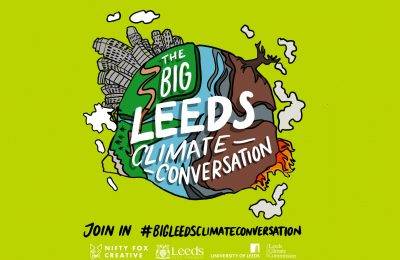 On July 16th Leeds City Council and the Leeds Climate Commission held ‘The Big Leeds Climate Conversation’ event, marking the start of a three month consultation in the city aiming to raise awareness of climate change, finding out whether individuals are willing to take action, and exploring what residents think about a number of bold ideas to cut emissions. The event brought together academics, citizens, members of the local council, activists, schools & businesses in Leeds to talk about how the city will achieve its zero carbon target by 2030 (as declared by Leeds City Council’s climate emergency declaration). 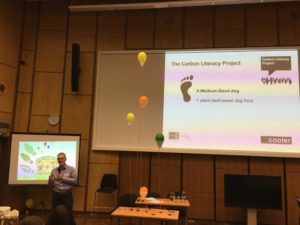 Carbon Literacy were invited along to the evening to deliver the project’s legendary balloon game activity in the breakout session part of the event. Dave Coleman, our Managing Director, challenged the audience to guess the carbon footprint of different activities such as taking a return flight to the Bahamas and using a washing dryer for a year to highlight the true carbon impacts of our lifestyle choices. In a “Higher! Lower!” sort of manner, helium balloons were released for the different activities, the relative height they achieved indicating the relative carbon footprint of the activity being discussed. The higher the balloon, the more greenhouse gases that activity releases into the atmosphere. The activity proved as popular as ever with the audience shocked at the relative differences in emissions of everyday activities.

Next door in the ‘Carbon Cafe’, project officers Emma and Natalia hosted one of the stalls in the marketplace. The Carbon Cafe was a space at the event for people to walk around and have a chat about what different organisations were doing to encourage collaboration between citizens, academics, local government etc. on climate action, as well as how they could get involved. 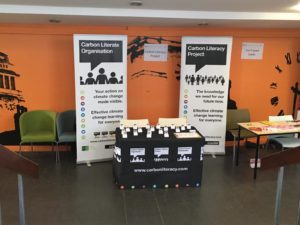 We felt that it was a very informative and inspiring event with a wide range of speakers from different backgrounds and disciplines. We thought that the question time-style Q&A at the end was particularly thought-provoking and a great way to include the wider citizen audience in the debate.

Following on from this event, residents can take part in an online questionnaire or have a conversation about climate change in person. Council officers, members of the Leeds Climate Commission and volunteers will have a presence at several events and meetings held across the city as part of the campaign. A report summarising the findings of the conversation and an action plan arising from it will be presented to the council’s Executive Board in December.

We look forward to seeing how the commission progresses with these conversations over the coming months and welcome any Leeds-based organisations who are interested in rolling out Carbon Literacy and educating their workforce or audiences on climate education/action to get in touch.

To watch the recorded stream of the event click here: