10th Anniversary Announcements: What Next for CLP? 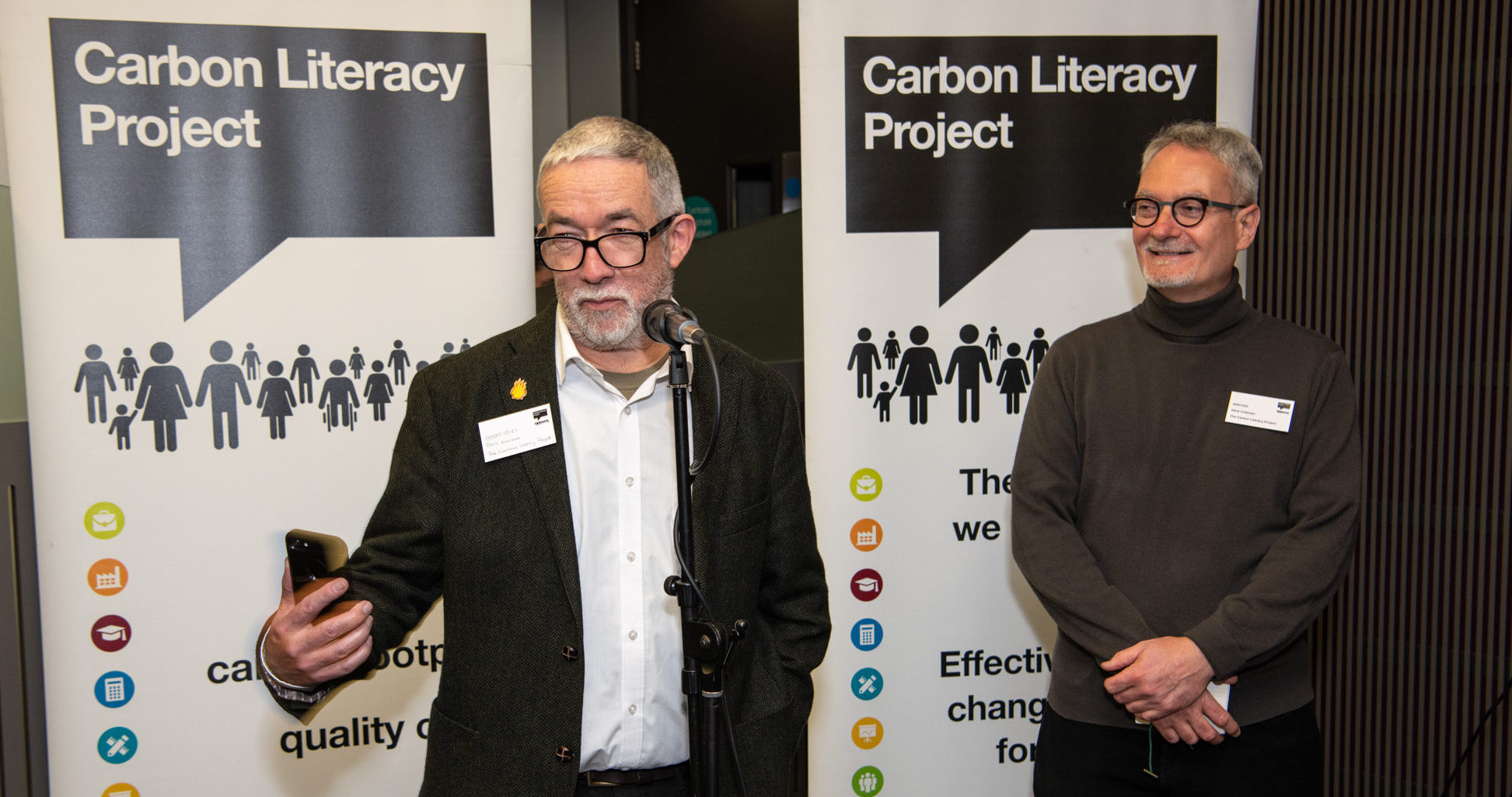 On the evening of Tuesday 1st November, we invited longstanding partners of The Carbon Literacy Project to join us at Manchester Metropolitan University to celebrate 10 years of Carbon Literacy.

It was an intimate occasion, with every person present having played a pivotal part in the project’s extraordinary journey so far and enthusiastically swapping stories of Carbon Literacy throughout the years.

Our Co-founders Phil Korbel and Dave Coleman gave short speeches reflecting on how far Carbon Literacy has come in the last 10 years, thanking everyone for their role in this, and looking forward to what we hope to achieve together in the next 10 years and beyond.

This will, of course, include and indeed rely on the wider Carbon Literacy community (we just couldn’t fit the 43,641 Carbon Literate citizens in one room!). If you’re reading this, that means you. So, we’re sharing that message here too.

Where We’ve Come From

We are in extraordinarily ‘bad’ times, with so many global issues (climate inaction, erosion of international cooperation, Brexit, Covid, and the war in Ukraine, to name a few) all slashing our bandwidth to engage in climate, while the effects of the climate crisis increase.

In the meanwhile, though, The Carbon Literacy Project has grown and grown, and every bit of CO2e we help prevent from entering the atmosphere minimises the risk of harm to our planet and its inhabitants. Carbon Literacy works because it looks the grim future in the eye and then enables action.

Carbon Literacy was conceived in Manchester as part of the city’s climate change action plan, but it is now unrecognisable from those early years. Climate action has shifted from the margins to core performance priority, and Carbon Literacy itself has become a core workplace competence without which many staff are professionally incompetent.

“None of the Project’s growth is possible without the amazing Carbon Literacy team and the extended Carbon Literacy ‘family’. Thanks to you all, I’ve got a great report-back for my daughters on how this once-small idea of ours is helping to secure them a better future.” – Phil Korbel, Co-founder and Director of Advocacy

For a while now, we’ve been plotting and projecting the number of Carbon Literate citizens with a particular target in mind: one million citizens certified as Carbon Literate. We’ve kept this to ourselves so far (lest you think us slightly mad) but now, on our 10th Anniversary, we’re happy to share that: at our current rate of growth, we are on track to hit one million Carbon Literate citizens by 2030. As this rate of growth is constantly increasing, the month we estimate we will hit this figure has come down from September to March of that year, just with this year’s growth!

As it stands, this is not just a hopeful ambition, and we don’t have to do anything drastically different to achieve it. But we are constantly trying to improve and, with that, we are announcing some upcoming updates and exciting new plans!

Updates to The Carbon Literacy Standard

We are launching a new Tiered Corporate Donor Scheme. The scheme will support organisations to donate to The Carbon Literacy Trust in a more structured and mutually beneficial way than has been previously available. The tiers – Friend, Bronze, Silver, Gold, and Platinum – are designed to enable organisations of all scales and sizes to partner with The Carbon Literacy Project, helping us to expand our offering of climate change learning-and-doing to ever greater audiences.

We will be launching a new accreditation ‘Carbon Literacy Educator’ (CLE). This will be for all educators – Universities, Colleges, Schools and Nursery – and will be specifically designed to suit their specific needs and circumstances (more so than the Carbon Literate Organisation (CLO) accreditation) and support the delivery of the UK Department of Education’s Climate & Sustainability Strategy aim to provide Carbon Literacy training to at least one sustainability lead in every locally maintained nursery, school, college and university in the country from 2023.

‘What can I do next?’ is a question we often hear from learners enthused and motivated into action by their Carbon Literacy training. Our response, join the CLAN! The Carbon Literacy Action Network (CLAN) will be a space for certified Carbon Literate citizens to share the progress of their pledges and discuss ideas for further action.

Watch this space for updates on all of these plans!

We would like to give a special thanks to Manchester Metropolitan University for providing their Business School Atrium as a venue for the evening’s celebrations. In particular, we would like to thank Professor Liz Price, who accepted our invitation to open the event. Fittingly, her speech touched on Manchester Met’s own journey with Carbon Literacy, right from the very start, and concluded by thanking our Co-founders – a sentiment we, as a team, echo. The Carbon Literacy Project provides us all with a platform to take meaningful action to tackle climate change, and for that we are grateful.