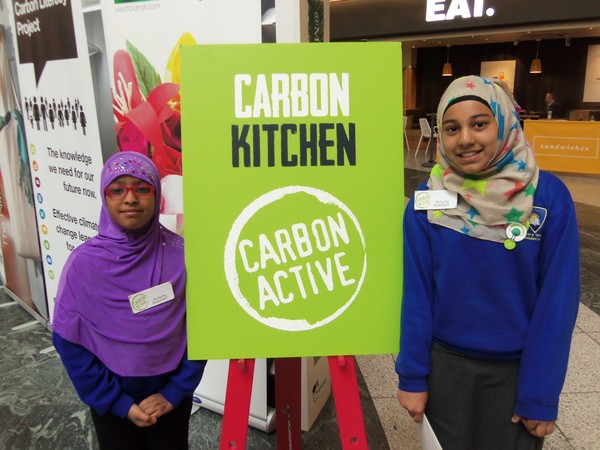 From the 5th to the 7th of June, Carbon Active took over Halle Square in Manchester Arndale for our second annual festival of climate action.

During our 3-day event, more than 79,000 people passed through the display area. Could this make Carbon Active the biggest climate change awareness event in the North West? With competitions, games, and things to do, there were at least 1,500 substantial interactions with people visiting the festival. Members of the public learned about climate change and discovered practical tips to help them reduce their own carbon footprints.

Carbon Active could not have happened without the financial support of Manchester Arndale, Electricity North West and Greater Manchester Energy Advice Service and the founding sponsors of The Carbon Literacy Project, Westford Mill.

During the course of the event: –

Making a mighty racket every hour, on the hour – and not to mention the sparkly red jacket (oh yes, we did) – our Big Carbon Balloon Game gave people the chance to guess the CO2 emissions of everyday activities, in a “higher! lower!” sort of fashion. Prizes were given out to the winning contestants and, due to the help of the fantastic Met Munch bunch (cunningly positioned in the audience), everyone ended up a winner! Many thanks to our lovely friends at Lush and Splosh for the excellent prizes.

It was a feel-good success, even if we do say so ourselves. We engaged many of the unsuspecting public, even pouncing on them when they were distracted by  The Big Carbon Balloon Game. We offered a fun and unscary way of starting to get involved in tackling climate change that was positively oozing with knowledge; promoting the creation of personal actions to reduce impact, improving quality of life and together creating a greater result.  Perhaps most of all, tens of thousands of people saw a big fuss being made about this thing called ‘Carbon’, and that people were having a good time doing so.

Click through to see some great photos from the event (more on their way!)