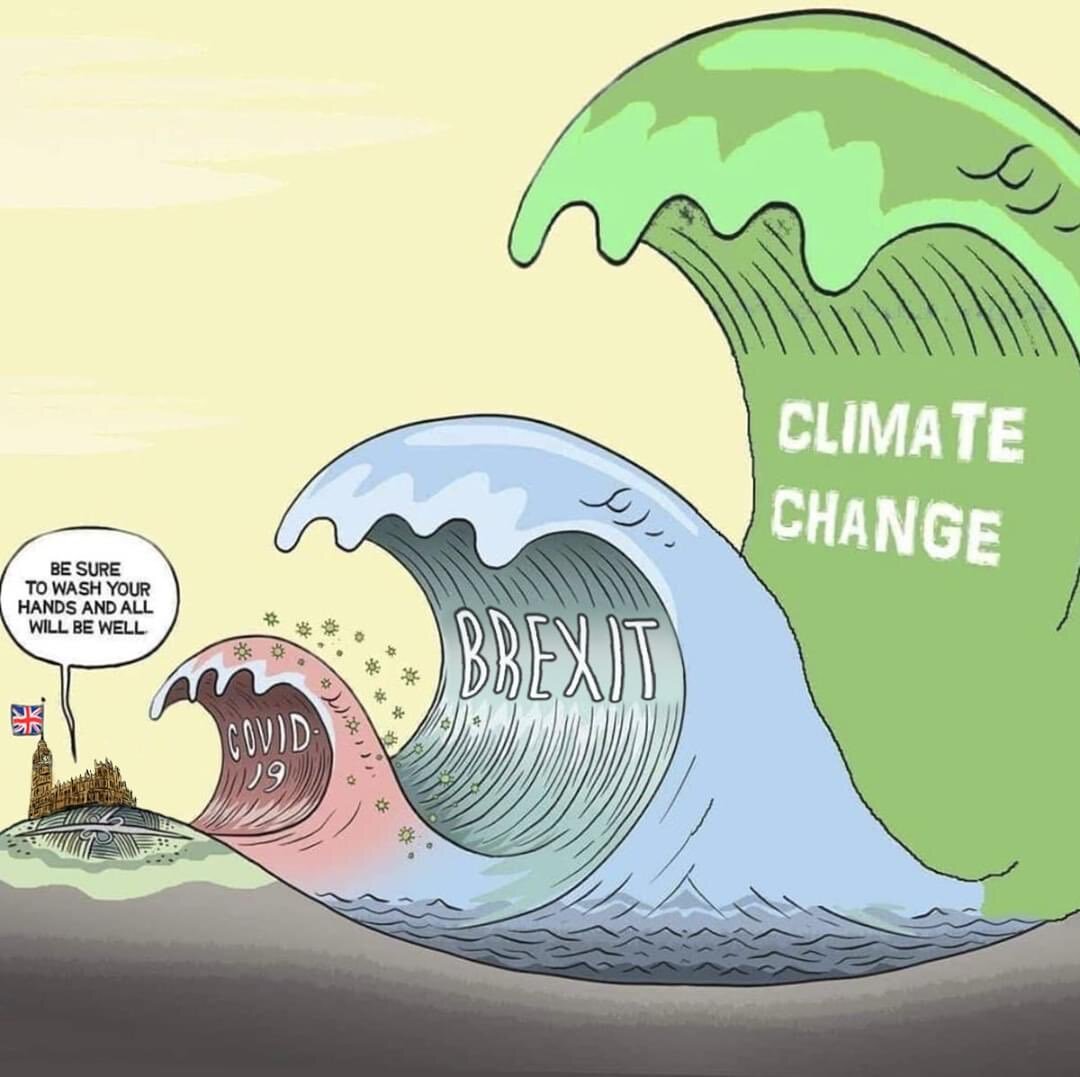 A few weeks ago I was able to attend a virtual Five Year Environment Plan Forum meeting, held in connection with the Greater Manchester Green City Partnership. The general catch-up on the progress of various ongoing projects inevitably led on to talk of the current COVID19 crisis, and the desperate need for a Green Recovery.

One obvious point is that the current situation will have positive and negative, long and short term effects on all aspects of life, through society, the economy and environment. An important aspect of any recovery will need to emphasise and extend the positive impacts, whilst minimising or reversing (where possible) negative impacts. Leaving aside the largest and most important negative impact to be minimised – the human tragedy that is loss of life and long term illness – there are other impacts on both sides that could either help or hinder us in dealing with the other pressing existential threat of climate change.

A Green Recovery, post-COVID19, would likely involve various stages that would all run in parallel, but have varying lengths of relevance. Releasing the lockdown state we’ve been held in will be the most immediate focus, but have the shortest time-frame. Learning to live with COVID19 for the meantime is likely to extend into the next year or so, depending on a variety of outside factors such as the development of a vaccine. The key topic, however, and one most focused on during this meeting was how we will ‘build back better’, which will extend into the future, shaping how we live our day-to-day lives after returning to some semblance of normality. Though what that normality looks like is up to us and is dependent on what actions we as a society decide to take now.

When discussing this within the group, a virtual sticky-board was used to capture thoughts and ideas based around the theme of building back better. Some of the obvious and immediate negative impacts that have happened include people not being able to work due to the nature of their job not being possible to complete at home. This has led to high levels of utilisation of the government furlough scheme, and in the worst cases, people losing their jobs entirely. Additionally, alongside those no longer able to work, those who are, are no longer commuting, temporarily leading to less traffic on the roads, and in turn less air pollution. However, this isn’t a sustainable change. There is a high risk that when people return to work, there will be a spike in personal car use with public transport potentially being perceived as less safe in terms of contracting the virus, leading to further congestion and a decline in air quality.

Moreover, with people working from home, domestic energy use has increased. This has positive implications, such as people not needing to commute, and using various technologies for virtual meetings. If this is going to continue, we need to make sure homes are as energy efficient as possible in order to counteract the spike. This can be done through retrofit which would be an economic stimulus, providing plenty of jobs for workers in the construction industry. Making sure these homes are run on renewable energy would be the next step, and should be facilitated through local renewable production, again providing jobs to create this infrastructure.

Looking to the positive changes that have occurred during lockdown, we have seen a massive increase in outdoor activity and active travel. The appreciation of the natural world and being out in it for a limited time has motivated many to try and get out into the fresh air as much as possible. Whether that be for your daily exercise, enjoying walks in the park or a garden if you’re lucky enough to have one, outdoor activity has increased exponentially. The increase in walking and cycling as a primary mode of transport is a particularly positive change the continuation of which should be facilitated widely as we come out of lockdown. Widening pavements, pedestrianising areas of cities, larger green spaces, and more, connected cycle lanes are all actions that could encourage an increase in this low-carbon behaviour. Active travel and engagement with the natural world also hold potential co-benefits for our communities; the subsequent decrease in air pollution, and increase in exercise alone would lead to a healthier population, both physically and mentally.

Furthermore, higher levels of community interaction have been observed and experienced by many. A willingness to help neighbours or those in need, an increase in the sharing of resources, supporting small & local businesses, and a rise in voluntary service are just some of the positive impacts this crisis has induced. Community resilience building will likely be paramount to the success of dealing with future impacts that climate change will bring. If we can build on these networks and communities now, we will be better prepared to deal with extreme weather events such as storms, floods and heatwaves that are likely to be in our future.

We now have options, and a few brilliant points were made in the meeting about how we must move forward. An economic stimulus will be needed to restart the economy, and start the process of recovery within Manchester, as well as around the UK and indeed, the world. It must be spent in the right ways, and it must make our zero-carbon targets easier to meet, and it definitely must not make them harder. Here in Manchester, we have set an ambitious target of 15% emissions reduction per year, leading to net-zero by 2038. This will involve radical, sweeping changes, and now maybe our best opportunity to invoke those changes by following the positives that we’ve already adapted to for one crisis, to help lead us to solve the next. It was an opportunity that nobody wanted, coming with a horrendously high cost to human life. However, we must take this opportunity now, to prevent further catastrophic loss of human life that will be incurred if climate change isn’t curbed as much as possible.

Image: Modified by Graham Hughes @EveryCountry from an original by Mackay for the Hamilton Spectator (Canada).