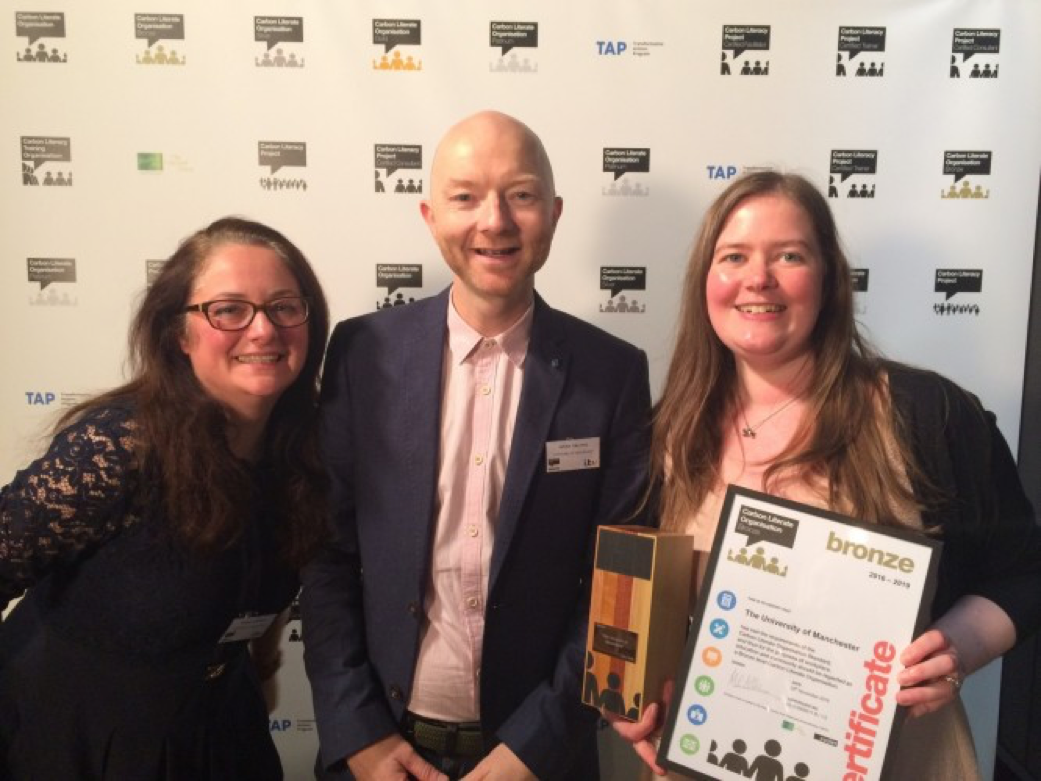 The gap between blogs actually reflects a period of manic activity here – and employers briefing staged at the BBC, an event on faith and climate change at Manchester Cathedral and last week the first Carbon Literate Organisation awards event, held on the set of Coronation Street no less.  There’ll be various accounts of these events to follow but we thought we would start with this proud blog from the first Carbon Literate university and museum – the University of Manchester and Manchester Museum…

Manchester is celebrating after being named the first Carbon Literate university and museum in the world.

The University has been awarded a bronze Carbon Literate Organisation award for its 10,000 Actions project, which asks every member of staff to take part in collective, measurable improvement towards sustainability. Each member of staff has been given the opportunity to learn about the key issues of sustainability such as travel, responsible purchasing and energy, and the actions they can take to make a big difference.

Manchester Museum, part of The University of Manchester, won a gold award as the great majority of staff have undertaken Carbon Literacy training and the institution has written Carbon Literacy into its review and performance processes. Two museum staff developed and delivered bespoke training to help all staff understand the impacts and differences that can be implemented. The Museum will be rolling this training out to other interested museums in the North West.

James Thompson, Associate Vice President for Social Responsibility, said: “This is a fantastic achievement for the University and brilliant recognition for the staff working on 10,000 Actions and Carbon Literacy at the Museum. The awards ceremony was held on the set of Coronation Street because Carbon Literacy should be as normal a part of everyday life as watching Coronation Street is to millions of people around the world.”

The unique awards recognise employers who have committed to becoming Carbon Literate Organisations (CLO) – that is, having a substantial number of people who are Carbon Literate and have a commitment to support them and maintain a low carbon culture. It will typically experience decreased in-house energy and resource consumption, have an improved organisational profile, healthier and happier staff and working environment, a safer supply chain, lower variable costs, enhanced competitiveness, and reduced commercial risk.