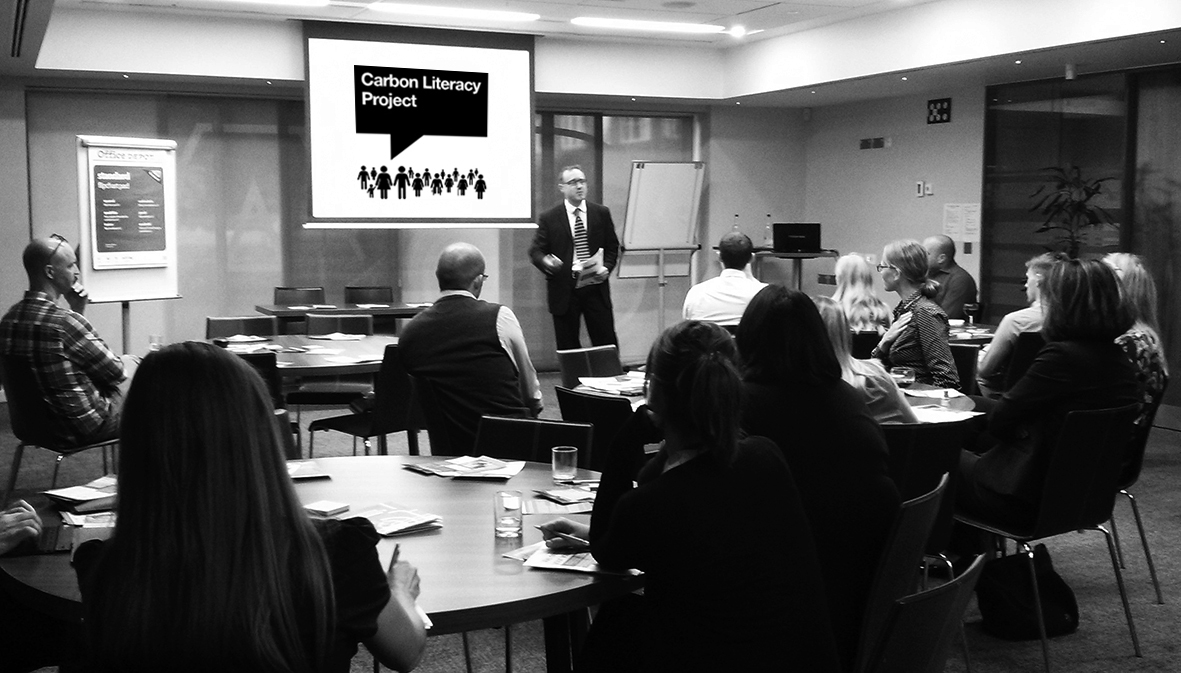 Throughout our 10th Anniversary year, we’re sharing 10 stories for the 10 years of Carbon Literacy; one story for each year, shared once per month, in the 10 months leading up to the official anniversary date in October.

For story number four, we’re heading back to 2015; the year Carbon Literacy gained global recognition as one of the top 100 responses the world has in order to tackle climate change.

Global recognition as a TAP100

The UN Climate Change Summit COP21, held in December 2015, gave rise to the momentous Paris Agreement, but it also gave us something on a much more personal and tangible scale. The Carbon Literacy Project (CLP) was selected from a global field to be part of the prestigious Transformative Actions Program (TAP), presented at COP21.

TAP was organised by ICLEI (a coalition of organisations representing city and sub-regional governments under the umbrella of the UN) to highlight projects that would transform action on climate change at a city or regional level. Under this, CLP was formally recognised as one of 100 worldwide Transformative Action Programs.

As one of only four UK projects awarded TAP100 status, CLP was seen as the vital ‘missing link’ between the technology to solve climate change and people’s motivation and action on the issue.

An opportunity to scale

The global recognition granted by the TAP100 award and the opportunity to attend COP21 in Paris offered CLP a platform for Carbon Literacy to make an impact beyond its birthplace in Manchester.

While CLP garnered media attention back home, the team in Paris met inspiring, influential and like-minded people from organisations across the globe. Connections were made that would help spread Carbon Literacy further than ever before, beginning with Wales.

After meeting Size of Wales in Paris, they invited CLP to host a meeting in Wales (once back in the UK) to present Carbon Literacy to Welsh organisations for the first time. Rhodri Thomas, Principle Sustainability Consultant at Cynnal Cymru – Sustain Wales, was in attendance.

Led by Rhodri, Cynnal Cymru was to become the official partner of The Carbon Literacy Project in Wales. We sat down with Rhodri to talk about why he embarked on this journey.

Rhodri had been providing training on ‘Sustainable Development’ for some years before being introduced to Carbon Literacy. But this, Rhodri explained, is a hard concept to explain, operating as it does on multiple scales. So the focus of Carbon Literacy immediately appealed to him.

“[Carbon Literacy] was about doing something practical about a particular aspect of Sustainable Development.”

Even though it had a single topic focus, Rhodri explained, the method and principle of Carbon Literacy learning allowed for, and in fact required, consideration of many aspects of Sustainable Development, including:

Rhodri was immediately sold: “It seemed that [Carbon Literacy] was what I had been looking for.”

Cynnal Cymru was created by Welsh Government Ministers at the dawn of devolution to act as a focal point and bridge between government and civil society. While there were other organisations operating in the same field, Cynnal Cymru had a unique responsibility and opportunity.

Rhodri explained that he had been party to discussions on ‘Sustainable Development’ and seen over and over again the problems people had developing this holistic and multi-faceted concept. There was plenty of talk but action was diffused.

“I was envious of colleagues who had single issue portfolios. Carbon Literacy gave me a focus and a framework for getting people to address the deeper questions of materialism, our relationship with nature, and the inequality of resource use.”

Establishing a partnership outside of Wales was hugely important for Cynnal Cymru. Carbon Literacy gave them the opportunity to think global and act local. Whilst on the one hand Cynnal Cymru had been created to serve Wales, they knew the best way to do this was to work with partners in other parts of the UK.

“This has been one of the best aspects of Carbon Literacy – making those cross border connections.”

Cynnal Cymru discovered Carbon Literacy at a time when they were reinventing themselves. In 2016, Cynnal Cymru ceased to be an arm of government and became an independent, free-thinking organisation. Carbon Literacy was a new and exciting concept that fitted their emerging profile perfectly.

Cynnal Cymru are rightly proud to have brought Carbon Literacy to Wales and to have made it into the huge success it is. They have now trained well over 600 people and set up or helped establish three consortiums, including Carbon Literacy Cartrefi Cymru (CLCC), with others beginning to emerge. This year has been particularly crazy – they have delivered Carbon Literacy at least once a week almost every week since January 12th!

But why did Cynnal Cymru decide to run so far with Carbon Literacy?

“A longer answer would have to acknowledge the great support and warmth we have received from Co-Founders Dave Coleman and Phil Korbel, and colleagues. The interest, time and respect given to us by the team in Manchester, reinforced our faith in ourselves.”

We thank Cynnal Cymru for their kind words about our team, for taking the time to talk to us for our fourth 10th Anniversary Story, and for continuing to champion Carbon Literacy across Wales and beyond.

Find out more about Carbon Literacy in Wales here.